This page gathers images ranging from advertisements to cartoons that take part in amplifying the spread of information. The cartoons shown depict different scenarios that might have taken place in RG&E or were used as forms of advertisements. The obvious forms of advertisement allude to possible RG&E partners and companies that were prevalent during that time. The rest are illustrations that might have been part of RG&E presentations. Details of the artists and contributors are unknown.

If you have any details you'd like to add, email us at rarebks@library.rochester.edu. Images will be updated with details, names, locations, and anything you can help us learn!

Check back soon as we add more images and materials to these pages. 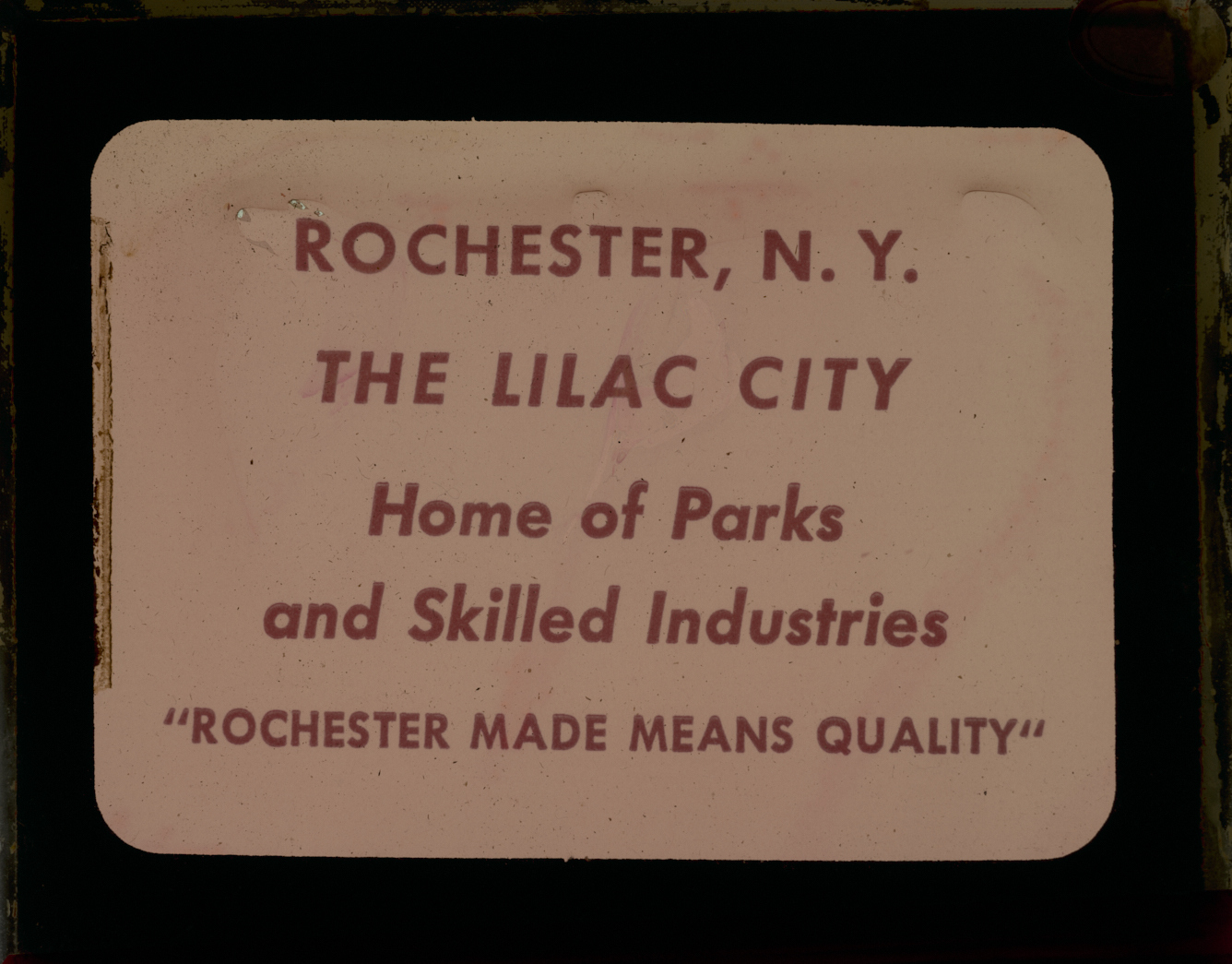 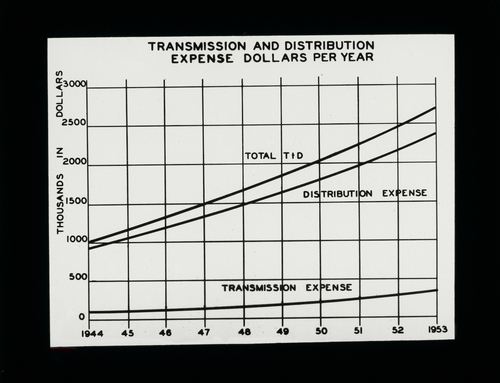 Labeled graph: "TRANSMISSION AND DISTRIBUTION EXPENSE DOLLARS PER YEAR". The x-axis shows the years between 1944 and 1953, and the y-axis indicated the thousands of dollars spent, ranging from 0 to 3000. There are three lines: total T+D, Distribution Expense, and Transmission Expense. 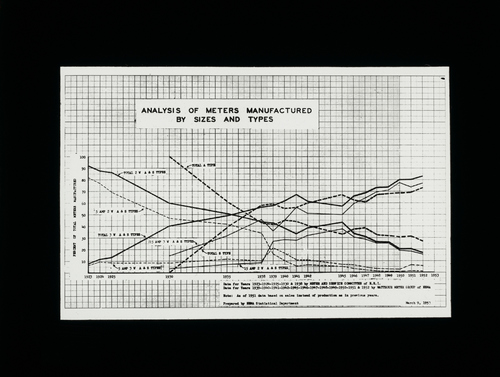 Labeled graph: "ANALYSIS OF METERS MANUFACTURED BY SIZES AND TYPES" with the x-axis indicating the years between 1923 and 1953, and the y-axis ranging from 10 to 100 of the percent of total meters manufactured. Several different lines are displayed, according to the different types. 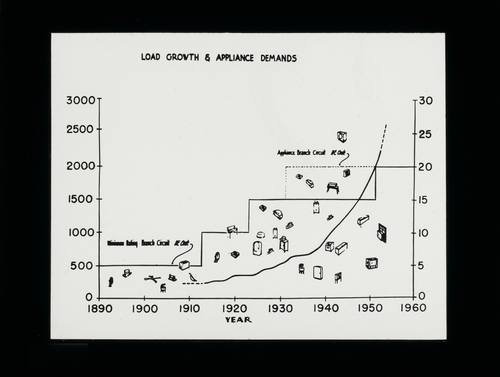 Labeled graph: "LOAD GROWTH & APPLIANCE DEMANDS" with the x-axis showing the years between 1890 and 1960, and the y-axis, though unlabeled, ranges from 0 to 3000 on the left and 0 to 30 on the right. There are small drawings of appliances on the graph, along with two different lines. 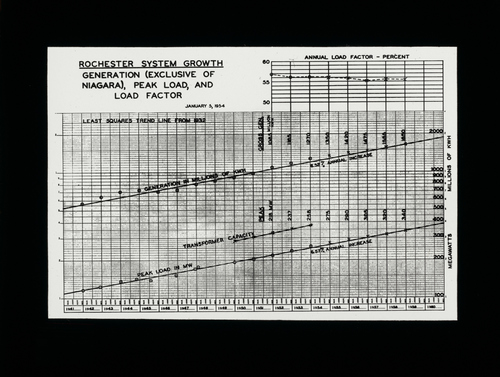 Labeled graph: "ROCHESTER SYSTEM GROWTH Generation (Exclusive of Niagara), Peak Load, and Load Factor" with an x-axis ranging from 1941 to 1960, in terms of years, and the y-axis measuring megawatts and kwh 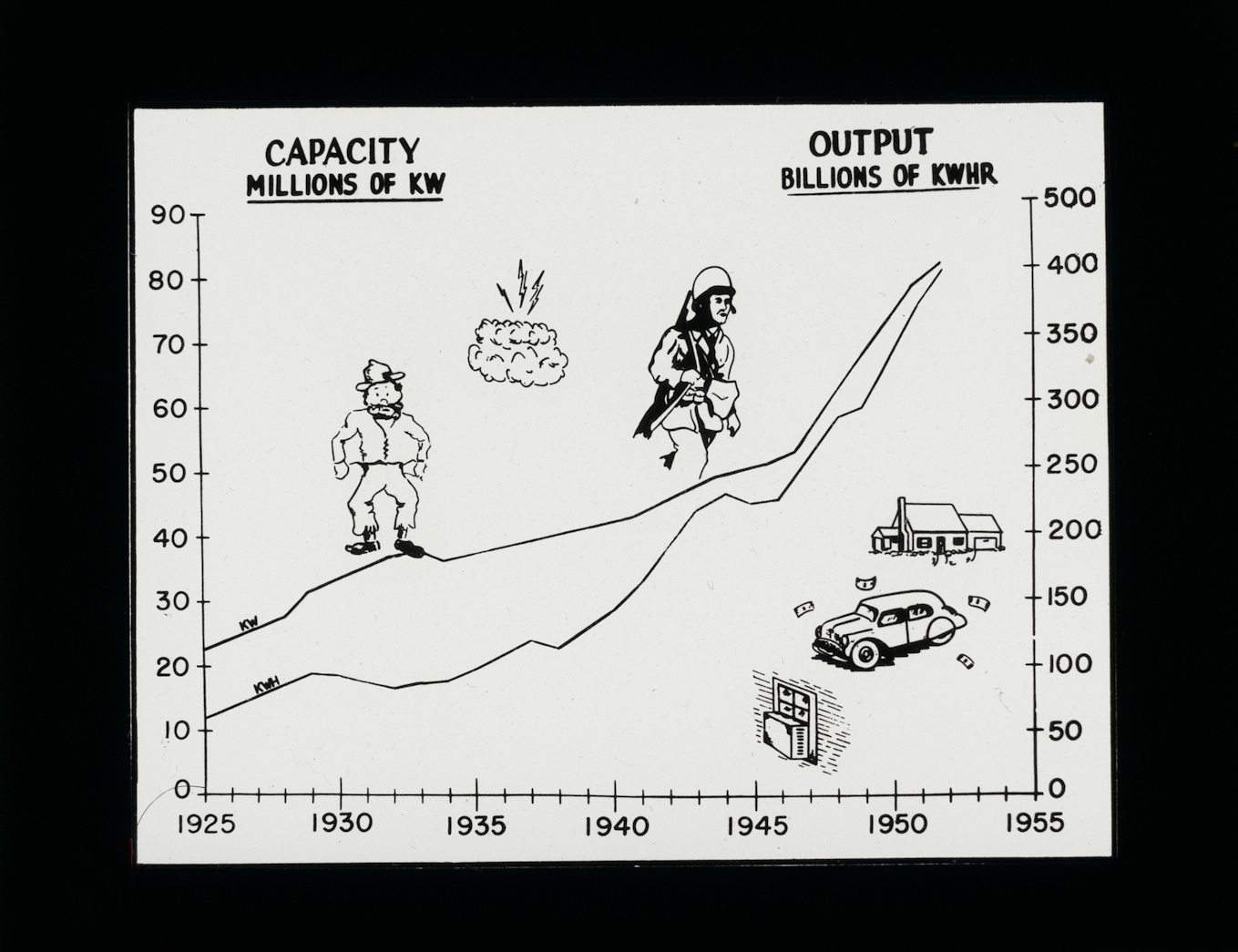 Graph with two concentrations: Capacity in terms of milllions of KW and Ouput in terms of billions of KWHR. The formert taking the left side and the latter, the right. The left y-axis ranges from 0 to 90; meanwhile the right ranges from 0 to 500. They both share the same x-axis whose years range from 1925 to 1955. Cartoon drawings of a thunder cloud, house, air conditioner, car, money, and men are scattered on the graph. 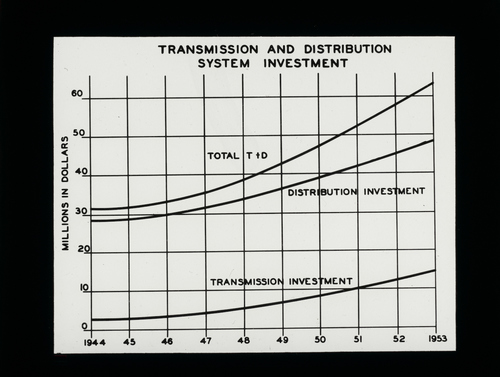 Labeled graph: "TRANSMISSION AND DISTRIBUTION SYSTEM INVESTMENT" with an x-axis measuring the years from 1944 to 1953, and a y-axis indicating millions of dollars from 0 to 60. There are three lines on the graph tracking Total T+D, Distribution Investment, and Transmission Investment. 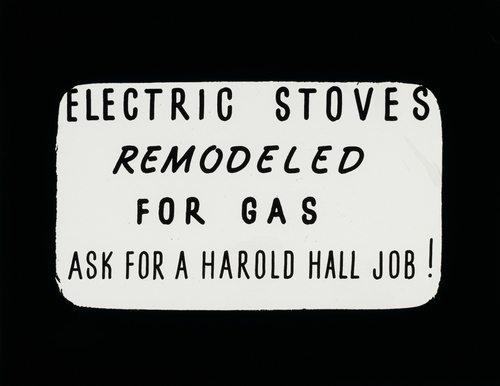 Title slide: "ELECTRIC STOVES REMODELED FOR GAS ASK FOR A HAROLD HALL JOB!" The font changes in each line. 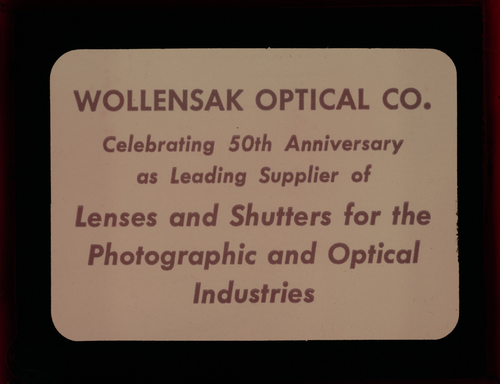 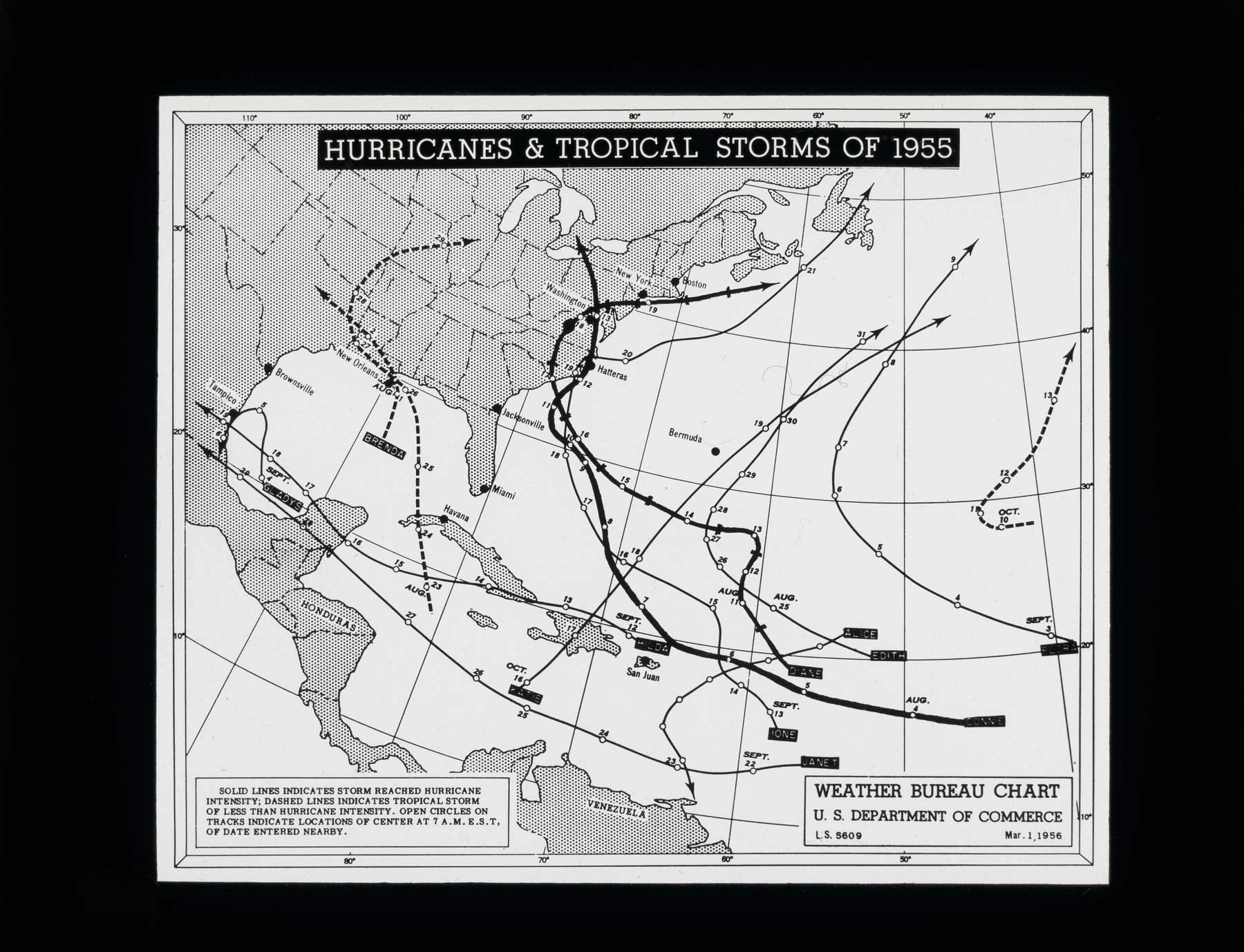 A map of Hurricanes & Tropical Storms of 1955 by the U.S. Department of Commerce. There are multiple lines. The countries highlighted include the U.S., Honduras, and Venezuela. 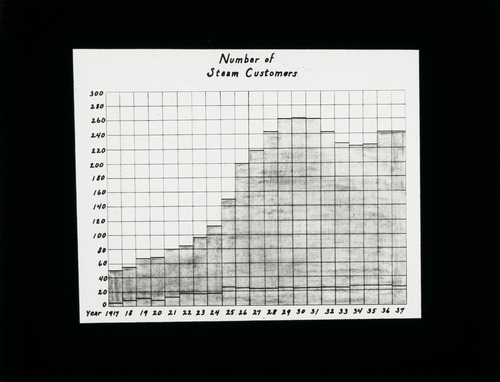 Labeled Graph: "Number of Steam Customers". The x-axis includes the years betweeen 1919 and 1937. The y-axis indicated the number of steam customers, ranging from 0 to 300. 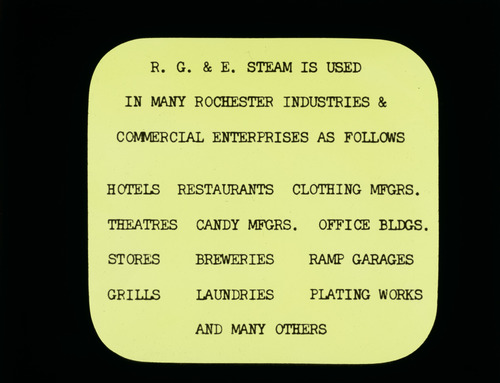 Colored info slide on R.G. & E. Steam, announcing that it's used in "many Rochester industries & commecial enterprises" with a list of examples below it. 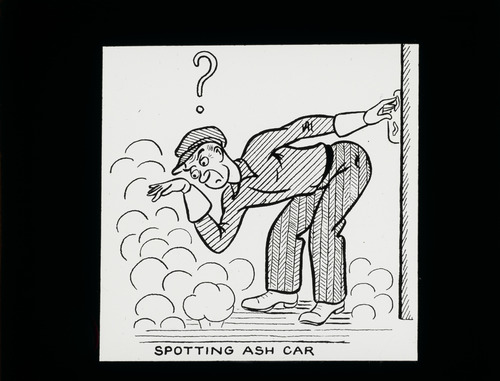 Cartoon image of a person "spotting ash car" with a question mark over their head. There is gas erupting from the floor board and they're pressing a button on the wall. 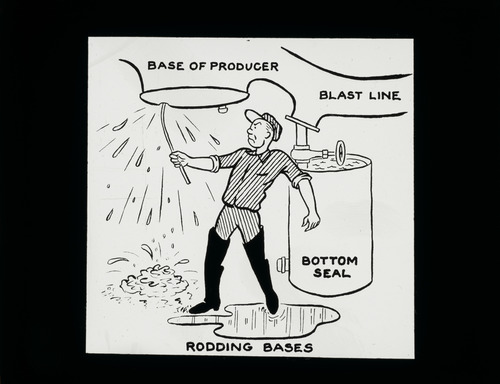 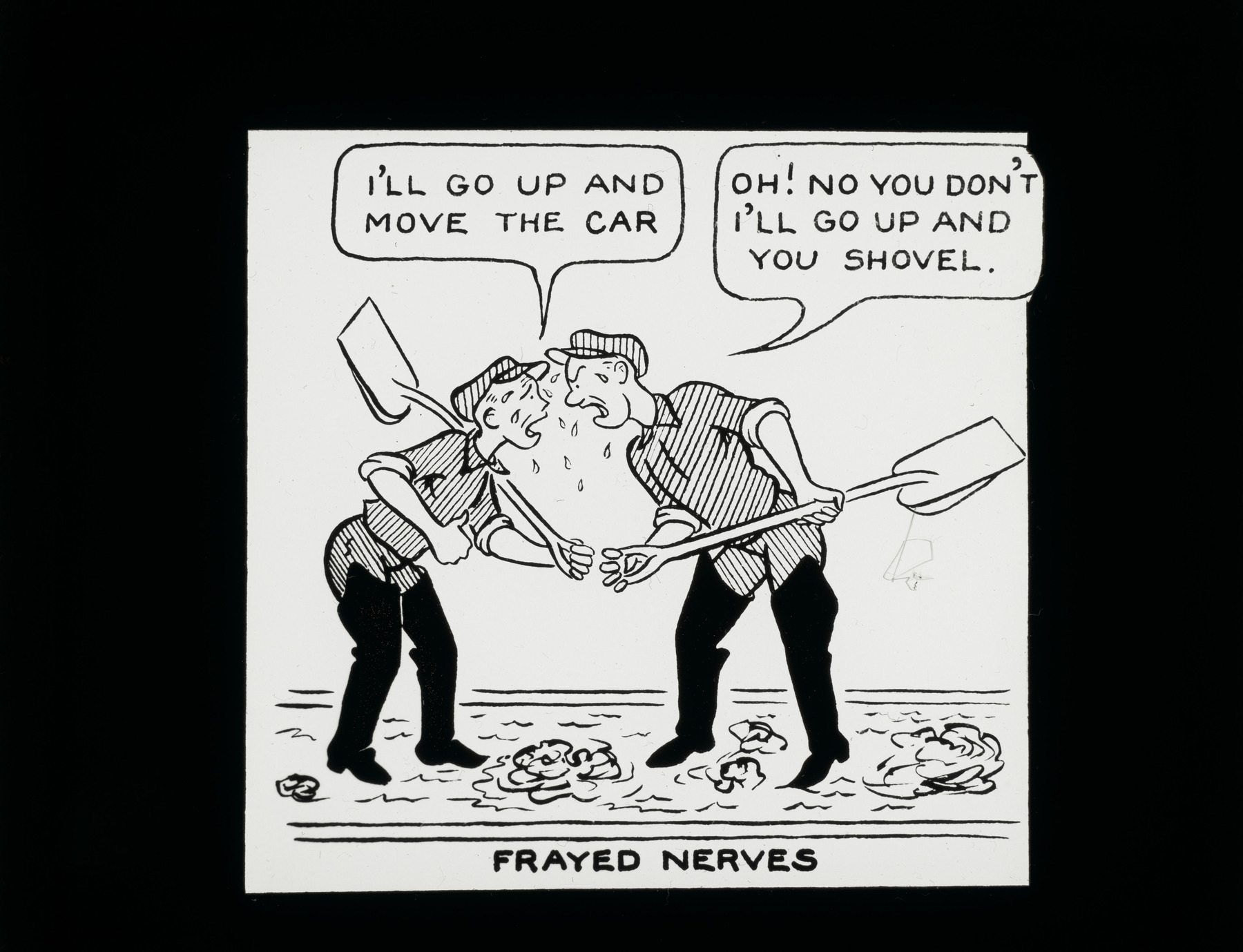 Cartoon image of two people, sweating, with shovels in their hands, screaming at each other. The one on the left is saying, "I'll go up and move the car," and the one on the right responded with, "Oh! No you don't, I'll go up and you shovel." The bottom caption is "Frayed Nerves". 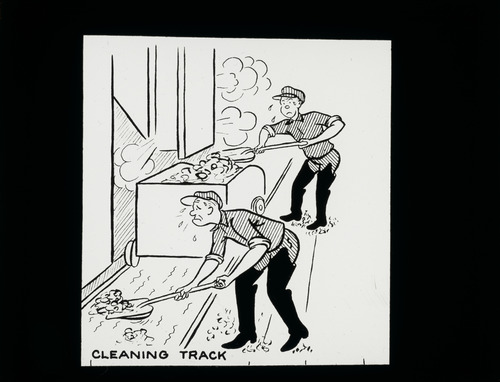 Cartoon image of two sweaty figures, shoveling up a substance from a wagon, as gas leaks from the top. The bottom is captioned 'Cleaning Track' 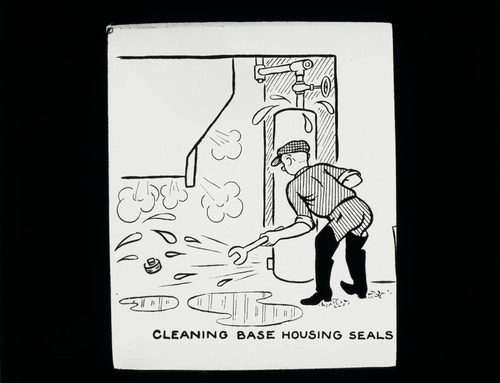 Cartoon image of a worker with a wrench in their left hand. They're looking at the leaking gases and puddles on the floor as a nut shoots out from a cylindrical vessel and causes fluids to escape. The bottom is captioned 'Cleaning Base Housing Seals'

A map of the eastern United States, Mexico, Cuba, Haiti, Puerto Rico, the Bermuda Triangle, Jamaica, and the northern part of South America. There are multiple lines stretching from these countries to other countries and/or the ocean. Each one is a different month, from June to October, and year, from 1888 to 1935. There are also Roman numerals, ranging from I to XIV. 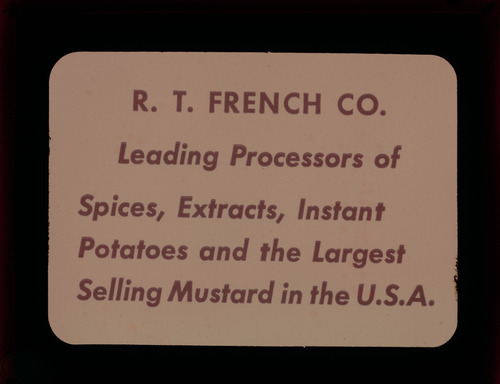 Colored title slide for R.T. FRENCH CO., stating that they're the "Leading Processors of Spices, Extracts, Instant Potatoes and the Largest Selling Mustard in the U.S.A." Today's iconic French's Mustard was begun in Rochester by the R.T. French Company in 1904. French's had its headquarters in Rochester until 1987. 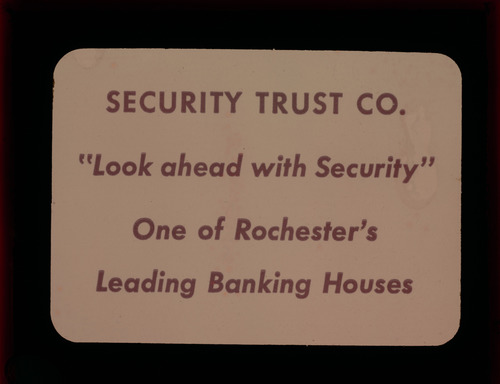 Colored title slide for SECURITY TRUST CO., with their motto, "Look ahead with Security". They're stating that they're "One of Rochester's Leading Banking Houses". 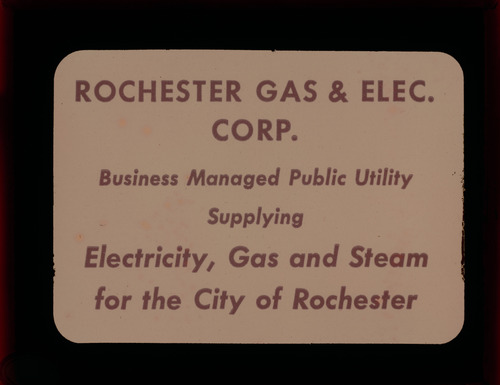 Colored title slide for ROCHESTER GAS & ELEC. CORP. The description includes statements such as, "Business Managed Public Utility Supplying" and "Electricity, Gas, and Steam for the City of Rochester". 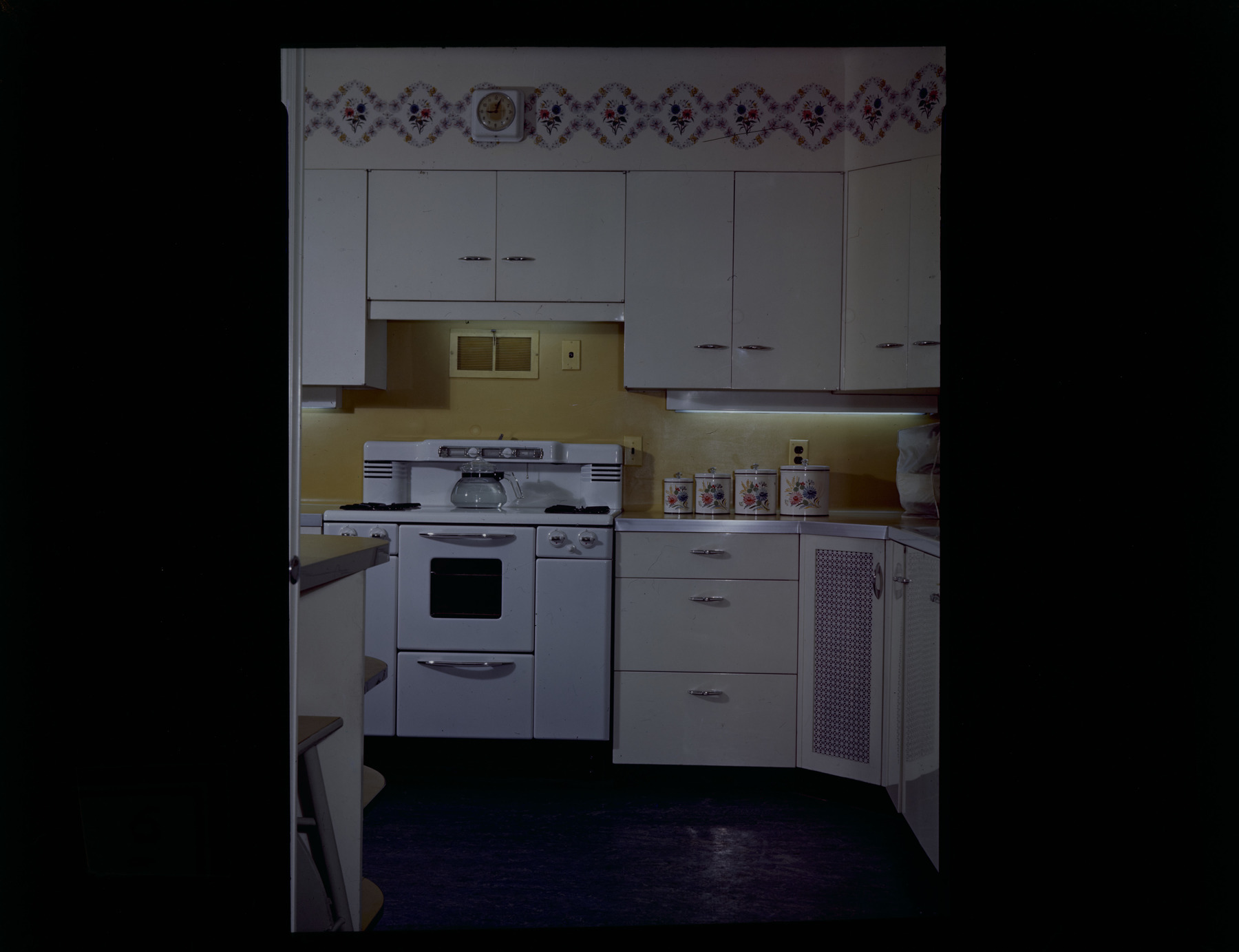 Colored image of a purple and white kitchen with cupboards, countertops, gas oven/stove, and miscellaneous kitchen décor. Might have been the site of a commercial or other form of advertisement. Other images of this kitchen are present in the collection, but have not yet been digitally imaged for this exhibit.