Last time on my quest for finding magical desserts, I was left thoroughly befuddled by witch cakes. What are they? How are they connected to magic? How is the term being historically used? Can I make one and eat it for myself?

After deeming the definition entry from the Oxford English Dictionary to be little to no help, I looked to Google and to the library website to see what searching turned up. The results generally pointed me toward references to the 1692 Salem Witch Trials.

At this mention of the Salem Witch Trials, I headed straight for our copy of Rossell Hope Robbins’s Encyclopedia of Witchcraft and Demonology. First printed in 1959, this tome remains one of the most comprehensive and authoritative resources on the occult. While there is not an entry for witch cake specifically, Robbins does include an extensive encyclopedia entry on the Salem Witch Trials themselves summarizing the events leading up to, during, and immediately after the hysteria of the trials.

Between June 1692 and May 1693, the inhabitants of Salem, Massachusetts, were caught up in a witch hunt frenzy. Two young girls, Elizabeth (aged 9) and Abigail (aged 11), began to have convulsive fits where they would shake, shout, and complain of being pinched or bitten. Reverend Samuel Parris, Elizabeth’s father and Abigail’s uncle, was worried by their behavior. The local doctor was stymied by the symptoms and pronounced that witchcraft was the cause of the fits. Ultimately, Parris pushed the girls to identify the witch responsible for their pain, and they singled out Rev. Parris’s West Indian slave Tituba, the beggar Sarah Good, and the bedridden Sarah Osborne as witches. These initial accusations sparked a year-long frenzy of accusations of witchcraft and investigations into the supernatural, which resulted in 19 people hanged, one pressed to death, and two others who died in jail. 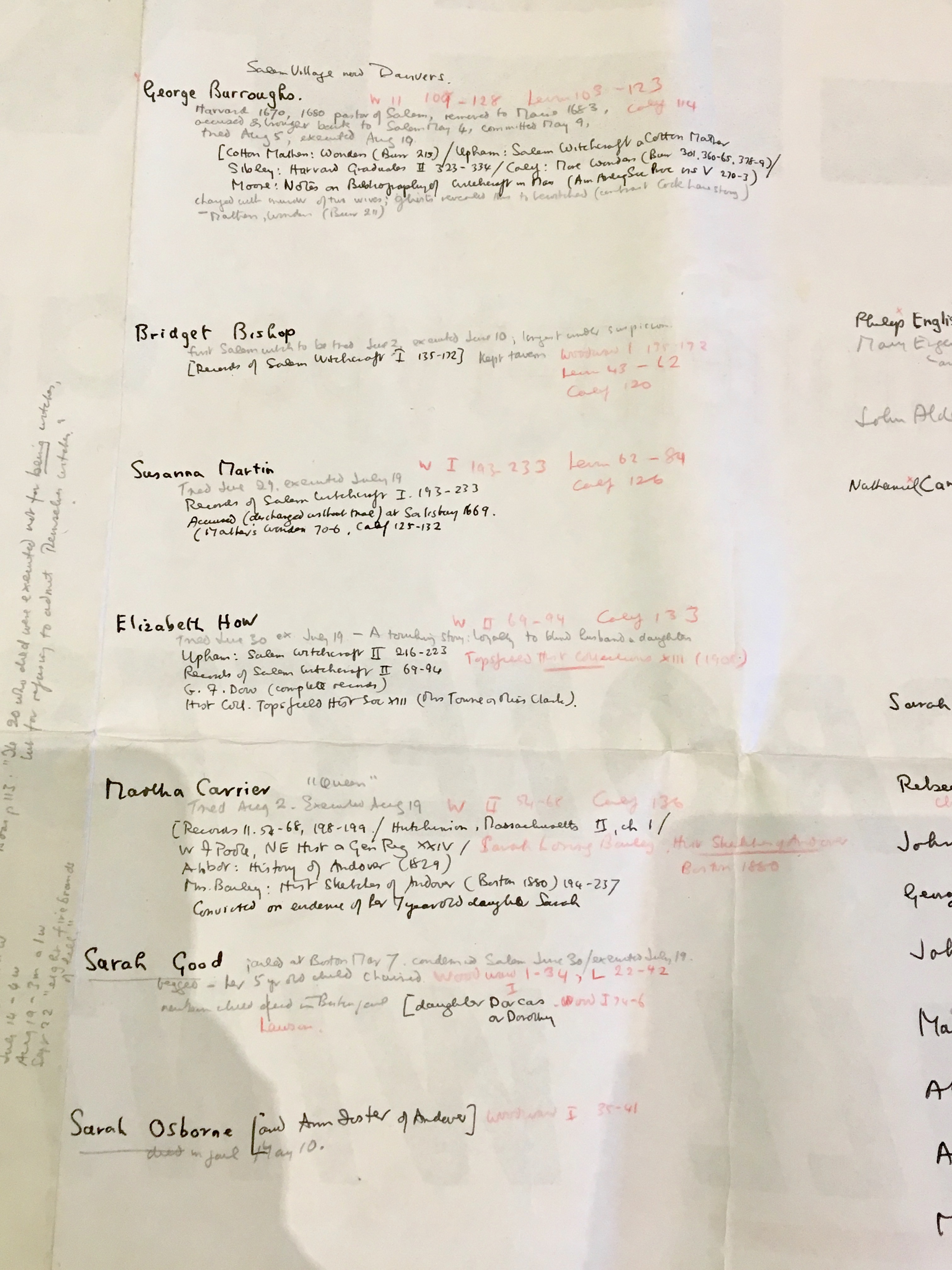 According to the Encyclopedia, Rev. Parris’s neighbor Mary Sibley instructed Tituba and/or her husband, John Indian, to bake a witch cake and feed it to a dog in the hopes that it would reveal whoever was bespelling the young girls in Salem. In his entry, Robbins describes the witch cake with a recipe found in a contemporary New England almanac: “To cure ague. Take a cake of barley meal and mix it with children’s water [urine], bake it, and feed it to the dog. If the dog shakes, you will be cured” (Robbins 431). Although Robbins doesn’t provide a citation for this recipe here, he very heavily highlights its supposed medicinal qualities for treating illnesses involving fevers or shivering fits, which were similar to the fits that Elizabeth and Abigail experienced. By including this recipe, Robbins implies that, as a treatment for ague, this witch cake could potentially cure the feverish, shaking fits that the girls experienced. But, Robbins also suggests that Mrs. Sibley may have “hoped that [...] if the dog got sick, the girls would tell who or what afflicted them” (Robbins 431).

Robbins posits that, although witchcraft was being blamed as the origin of the girls’ fits, it was Mary Sibley’s insistence on baking a witch cake that forced the Rev. Parris’s hand to investigate the accusations of witchcraft. The creation of the witch cake itself was a dubious act that began to cross the line into witchcraft itself. In his entry, Robbins indicates the witch cake as a potential turning point in the Salem Witch Trials investigation. But, since the Robbins Library’s collection includes a vast array of Robbins’s personal notes and research for his many publications, I also had access to his notes from when he was preparing his Encyclopedia of Witchcraft and Demonology. In his notes to for the Salem Witch Trials, Robbins is more direct: 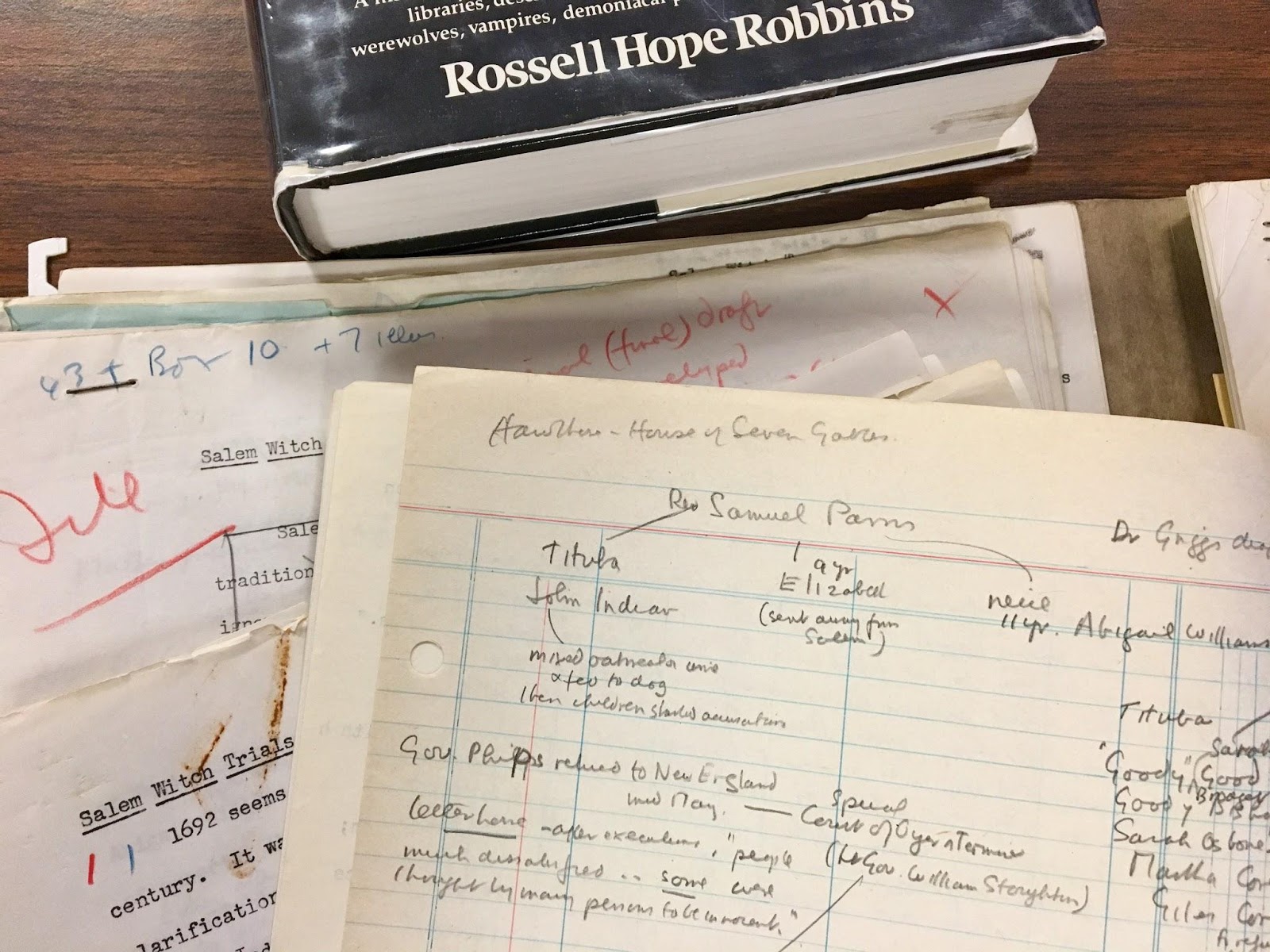 On this page of his notes (pictured above), Robbins mapped out the relationships between the people involved in the case, with his focus on Rev. Samuel Parris’s connections to 9-year-old Elizabeth and 11-year-old Abigail, two of the first young girls to have fits allegedly caused by witchcraft, and to his slaves Tituba and John Indian. He has an added note underneath the two slaves’ names: that they “mixed oatmeal + urine + fed to dog, then children started accusations.” His shorthand notes suggest a direct cause and effect relationship between the two instances, a point that is supported by other scholarly articles. Linnda R. Caporael suggests, in her 1976 article in Science, that ergotism, “a disorder resulting from the ingestion of grain contaminated with ergot, may have initiated the witchcraft delusion” (21).

When I found myself looking up articles on the hallucinogenic effects of accidentally ingesting grains that are infected by strange types of fungus, I decided to stop and reevaluate my life choices. At this point, I still wasn’t entirely sure what a witch cake’s purpose was -- whether it was a tool to identify the presence of magic or a magical creation in and of itself. It seems to be a semi-invented term that addresses, through its irritating vagueness, the inherent danger and skepticism with which magic is associated. Either way, I no longer want to eat it. I’d rather take cake in the shape of a witch instead.