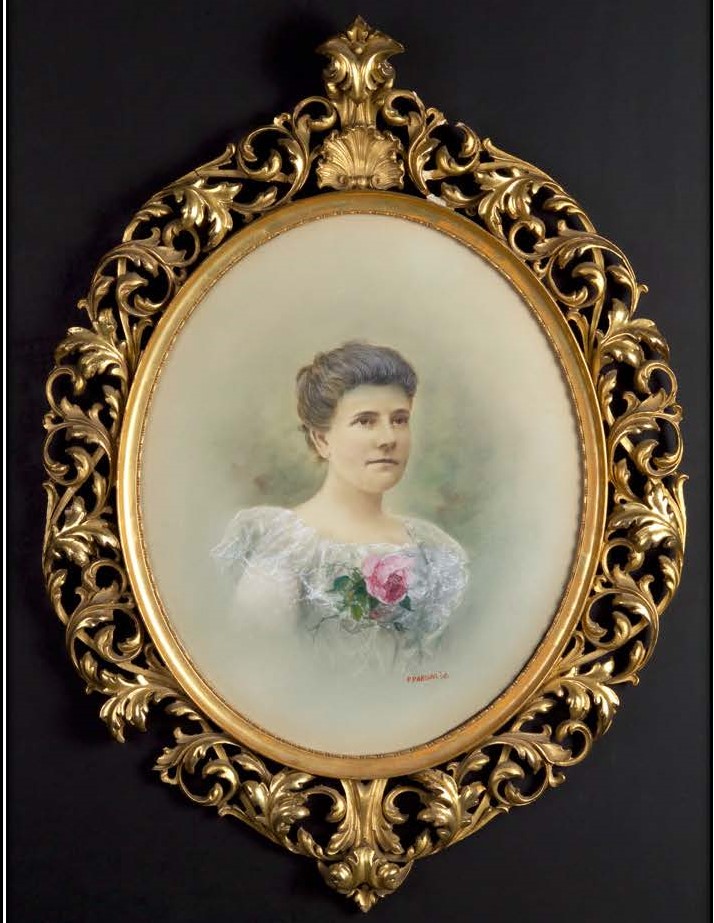 Rochesterians tend, historically, to be a philanthropic group. One of the earliest organizations, founded in 1822 nearly simultaneously with the settlement of the community was the Rochester Female Charitable Society, whose papers are housed in the Department of Rare Books, Special Collections, and Preservation [RBSCP]. Eleven years following its founding, Elizabeth Tinker Sibley [1815-1903] arrived in Rochester from North Adams, Massachusetts, joining her fate with the fortunes of her entrepreneur husband, Hiram. It would not be for twenty years that their wealth exploded, largely due to Western Union, but thanks to the Sibley papers also housed at RBSCP (and more recently discovered at George Eastman Museum), there is documentation of three generations of the Sibley family’s Philanthropy - large, public gifts - and philanthropy - often anonymous, individual responses to community needs. Elizabeth’s daughter Emily [Mrs. James Sibley Watson, 1855-1945] and Elizabeth’s niece by marriage, Georgiana Farr Sibley [Mrs. F. Harper Sibley, 1887-1980] continued the family legacy of seeing what was needed and making sure it happened.

In Elizabeth Sibley’s 1850-1851 diary and letters, she described her spiritual struggle to do good. A devout Episcopalian, she supported her church and other Episcopalian causes, as her daughter Emily and niece Georgiana would do as well. Her public philanthropy helped create the Episcopal Church Home (then for the elderly and children) and the Homeopathic Hospital (later Genesee Hospital). However, her private gifts show a generous nature full of concern for individuals who were not necessarily valued by society. One, an unwed mother in Honeoye in 1850, was the recipient of a visit from Elizabeth and the gift of nutritious food. Another, a Black medical student in Philadelphia, described his despair and rescue by Elizabeth, to whom he ascribed his turnaround from a failure in medical school to success as a medical school graduate. Indeed, actions like these were what led her pastor, Rev. Algernon Crapsey, to describe her this way in her obituary: Those whom she benefited cannot tell, for when once Mrs. Sibley began to give, she gave so freely and so continually that her beneficence was as the providence of God a mere matter of course.

Exposure to her mother’s example set Emily Sibley Watson on a similar path of addressing institutional needs and more private, individual needs. Known best for her 1912 gift of the Memorial Art Gallery to Rochester, she had a history of many years of support of Rochester artists and art organizations, including the Rochester Ladies Art Exchange and the Rochester Art Club. Her affection for violin prodigy David Hochstein motivated her to buy his childhood home on Joseph Avenue in 1920 and outfit it as a music settlement house so that talented children seeking music education could obtain lessons at no cost or for greatly reduced prices. Like her mother, Emily’s heart - and bank account - was open to the needs of many individuals, including musician and teacher Herman Dossenbach and his daughter Hazel, whose Eastman School tuition was paid by Mrs. Watson, to an anonymous “blind soldier” in World War One. Her ledgers were recently found in the archives of the George Eastman Museum, which list, among other things, the contributions that she made during World War I, which amounted to the equivalent of hundreds of thousands of dollars (in today's dollars). During the Depression, she made many individual gifts to friends, particularly women, who had limited means - a radio, a car, cash. At the end of her life, as she spent many hours at her window overlooking Prince St., her heart was moved to make a gift to the young soldiers who marched from their quarters at the Rochester Theological Institute, past her home, to the Armory, to make their accommodations more comfortable.

Like her grandmother and aunt by marriage, Georgiana Farr Sibley was inspired to do good by the teachings of her church. Georgiana responded to the inequity and oppression that she saw in the world around her. In Rochester, she was particularly aware of racism and the difficult and inequitable conditions in which Blacks lived and worked. She allied herself with local and national organizations, such as the NAACP, that strove for the betterment of these conditions, and she chaired the local Commission on Religion and Race. She opened her heart and her home for meetings and collaborations between the Black community, represented by the FIGHT organization (whose papers are also in RBSCP, housed across multiple collections) and the representatives of Kodak, in the interest of bettering employment conditions for Blacks at that company, then the largest employer in Rochester. Her life embodied the frequent overlap between philanthropy, religion, and politics. There are many stories about her grand gestures as well as her most tender concerns about the children of those she encountered. Mrs. Sibley’s contributions of time and energy on behalf of social betterment overshadowed public awareness of her financial gifts, but like Elizabeth and Emily, she donated resources where they were needed.

For one hundred and fifty continuous years, these women kept the name “Sibley” linked to philanthropic actions in this community and beyond. Their legacy - in big ways and small - made Rochester a healthier, more equitable, and culturally richer place for its citizens to live.

Questions from our viewers:

1.     Could you provide a “family tree” diagram to show how each of them was related to the others?

2.     We live in the 19th ward, in an area called the Sibley tract.  Is there a connection to these Sibley women?

While most associate the name Sibley with the Western Union enterprise, the Sibley family also owned massive amounts of real estate in Rochester and other parts of the country. The Sibley tract was one of many parcels that would have been owned by the Hiram Sibley estate and managed by Elizabeth’s husband Hiram and Georgiana’s husband Harper, as well as Harper’s father Hiram W. Sibley. So yes, there is a definite connection. I am not 100% sure of when the Sibley family acquired the Sibley tract property, but Hiram Sibley owned property all around the city of Rochester.

3.     Sometimes (in my experience) birth order in one's family is determinative of one's positions (political or otherwise) in life: oldest daughters (or sons) being more traditional and/or conservative, and youngest children being more rebellious and outspoken. ("We want more and we will have it.")…  In my view, the voices of women (like Emily Sibley Watson's) have not been given much of an airing - understandably perhaps - in discussions of the evolving of Women's Suffrage. Rochester Historian Ira Srole's play about the Women's Right's Convention in Rochester took a shot at it and at least one of the characters gave voice to the centrality of a woman's role in her home and in the orbit of her family and those who believed this would be compromised by involvement in the "dirty" world of politics and governing…In light of this, I'm wondering if Georgianna Sibley was "a youngest" in her family and perhaps even enjoyed "shocking" some of her contemporaries with her views? How did she become "radicalized" (relatively)?

Interesting thoughts. Regarding women’s suffrage: my guess is that Elizabeth Sibley was not pro-suffrage, and we know that both Emily Sibley Watson and Georgiana Sibley were anti-suffragists. Emily was on the anti-suffrage committee; Georgiana said in an interview with WXXI’s Bill Pearce that she was influenced by her mother’s views on the subject, and her mother’s belief that the family was a unit and there was only need for one family member to vote, as the husband would represent the position of the family unit. She acknowledged that later she came to understand that this was not the case for other families, that the husband did not necessarily represent the political position of the wife and daughters.

It’s my opinion that all three women were deeply thoughtful and had more autonomy than most women in their social class. While unfortunately they didn’t write about this, we have evidence that they managed their own wealth and made independent decisions about how that money was spent.  Elizabeth and Emily affiliated themselves with the congregation of Algernon Crapsey, St. Andrew’s Church, which leaned heavily toward social justice, unlike the swankier St. Paul’s - for example, at a time when there were charges for pews, St. Andrew’s advertised that their pews were free. Emily Sibley Watson helped to advance the career of the young son of Jewish immigrants, David Hochstein (and the nephew of radical Emma Goldman); Elizabeth had a crisis of faith and found solace in her Irish Catholic servants’ prayerbooks, and came very close to converting to Catholicism at St. Mary’s Church. I don’t think that this is answering your question very well about the political arena. I think that yes, they were content to leave the actual governing to men because the applecart in their homes most certainly did not need overturning to function well.

Georgiana was the only daughter and second child born to her parents. Regarding Georgiana’s radicalizing, that is a great question. Miss Spence’s School in NYC where she was educated was not a hotbed of radicalism. The Teddy Roosevelt family lived nearby to her family in NYC, and she became close to Alice Roosevelt and spent time in the circle of the President, whom she considered to be very progressive. She became quite friendly with Eleanor Roosevelt, and that might have been an inflection point for her. In reading through interviews with her, I was struck by her statement that everything that she has done in her life has been inspired by/in service of God. Rather than desiring to shock family and members of her class, it seems that she was attuned to a voice that she held in higher regard.

I think that we don’t give enough credit to Georgiana’s breaking with the ranks of entrenched Republicans. I don’t think Georgiana cared if she lost friends or not! I guess, bottom line, I do not think she chose to shock for the sake of shocking. She took some remarkable steps and she knew that her Sibley name carried a great deal of weight in this community. Now, whether her extended family in Rochester appreciated her forays into the public realm, is another question that we may never be able to answer. Certainly, her husband was a supporter. In the Bill Pearce interview, she speaks proudly of her daughter and granddaughters who held public office and were training for professional careers, so she set an expectation in her own family, I believe, among the women. I’ll close by alluding to a newspaper article I recently found in the October 24, 1945 Kansas City Times, which describes a Washington, D.C. meeting of the United Council of Church Women, of which Georgiana Sibley was president. The Council’s policy was to avoid meeting in cities where segregation was the rule. To be able to meet in D.C., they solved the problem of segregated housing by inviting white women to stay in the homes of Black women, and Black women stayed in the homes of white women. Mrs. Sibley stayed in the National Council of Negro Women’s building. I cite this to acknowledge two things: first, the hard reminder that discussing housing arrangements was newsworthy in 1945, and second, that she was engaged in promoting integration long before it was politically correct.