1900 is the year that women were formally admitted as undergraduates to the University of Rochester, but their influence on the institution can be traced to our founding in 1850. 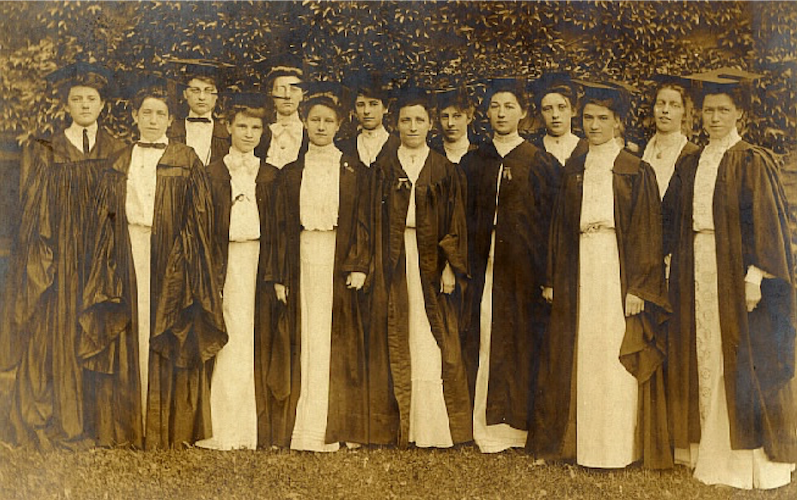 The portion of the online exhibit, "We Want More..." which focuses on the University of Rochester provides highlights of the early women at the University, as well as some of the "firsts" - first faculty, first graduates, first dean, first trustee, first department chair, etc. The ExhiBit presentation available on YouTube delves more deeply into the presence of women -- as students, faculty, and administrators -- prior to 1900. This blog post will take a closer look at a further connection between a subset of those individuals who, not being able to earn a degree at Rochester, attended other institutions, and in particular, Wellesley College.

Prior to 1900, the number of prominent colleges and institutions that admitted women, either as women-only or coeducationally -- was limited, though increasing. The Democrat and Chronicle reported on January 1, 1897 that a New Year's Eve reception hosted by the Wellesley College Association of Rochester at the home of Mrs. E. R. Andrews drew "nearly 150 representative[s]...including graduates from Wellesley, Oberlin, Ann Arbor, Boston, Bryn Mawr, Chicago, Nassau, Elmira, Syracuse, and Mt. Holyoke."

At least twelve women (listed below with dates of attendance at Rochester) are known to have taken courses at the University prior to 1900 as special students--meaning they attended classes with male students in a particular concentration of study, without earning credit. Five of those twelve were college graduates, and three of those five were graduates of Wellesley College.

Other Rochester women among the pre-1900 graduates of Wellesley with connections to the University were:

And almost of these women would have known Elizabeth H. Denio, Ph.D. (Heidelberg) as Professor of German and Art History at Wellesley from 1876-1896. Denio would teach Art History at Rochester from 1902-1917.

The Wellesley College Record, 1875-1900 lists over 35 women who either came from or settled in Rochester. Galusha Anderson (Class of 1854) was briefly on the Wellesley Board of Trustees. For the academic year 1899-1900, the University's president-elect Rush Rhees was listed as an instructor of Biblical History, which he also taught at nearby Newton Theological Seminary. More research is needed to determine if Wellesley really dominated as a preferred school for Rochester women prior to 1900, and if so, why.

A question from our viewers:

"What is the significance of the role of Gertrude Herdle Moore, alumna and one of the first women museum directors in the country?"

Gertrude Herdle Moore earned a BA degree from the University of Rochester in 1918. She was Phi Beta Kappa, and was awarded the Elizabeth M. Anderson Prize, as was her sister Isabel (Class of 1927). The history of the Anderson Prize is worth a slight digression.

The Elizabeth M. Anderson Prize was established in 1891 by Anderson's nephew William Wallace Gilbert (Class of 1861), to be given "annually to a member of the senior class who has attained proficiency in the special study of art or who writes a thesis on a subject connected with art." Elizabeth Anderson was the wife of the University's first president, Martin B. Anderson, who gave lectures on art and art history to students and the Rochester community. Together the Andersons traveled to Europe in 1863 and devoted considerable time to visiting museums and galleries. The prize recognized both Elizabeth Anderson's love of art, and the importance of the subject for serious study.

A letter in the Archives from William W. Gilbert indicates that he agreed to open the Anderson prize to women students. The first woman to receive the award was Alice Harriet Colby in 1904 for her essay on the topic "Gothic Architecture in Italy." The judge that year was architect Claude F. Bragdon.

When the Gallery opened in 1913, the artist George Herdle had been given the responsibility of selecting and mounting the new institution's first exhibition, and was designated as Acting Director.

Believing that the gallery should be run by an academically-qualified director, University President Rush Rhees sought, and failed, to find a suitable candidate. George Herdle's real-world qualifications and community connections convinced Rhees to offer him the permanent position. When the Gallery's first secretary resigned to take up war work in 1918, Gertrude Herdle was named in her place, effective June 19, 1918, the date of her graduation from the University. Within four years, her father would succumb to Hodgkin's disease (according to the interment records of Mount Hope Cemetery), and at the age of 22, Gertrude would be named the Gallery's director.

In 1925 Herdle Moore became only the third woman to be awarded an honorary degree by the University. The first, in 1910, was the Dean of the College for Women, Annette Gardner Munro; in 1924, the president of Radcliffe College, Ada Louise Comstock, who had no active connection to the University, received an honorary Doctor of Laws. Awarding honorary degrees to Munro and Herdle may have been intended to remedy the lack of earned advanced degrees on their curricula vitae, which was the case for a not-insignificant number of male recipients as well.

Elizabeth Brayer's 1988 history of the Memorial Art Gallery, MAGnum Opus, and the online history created to celebrate the gallery's Centennial outline the many accomplishments of Gertrude Herdle Moore. To estimate her significance, it is tempting to paraphrase the encomium in St. Paul's Cathedral commemorating its architect, Christopher Wren: "If you seek her monument, look around you." Like other leaders chosen by Rhees to head the major divisions of the University -- Howard Hanson at the Eastman School of Music, and George Whipple at the Medical School -- Herdle would have an extraordinarily long tenure of 40 years, which provides evidence of her vision and her success in implementing it.

Herdle is not typically ranked beside them: perhaps it is time that she was.