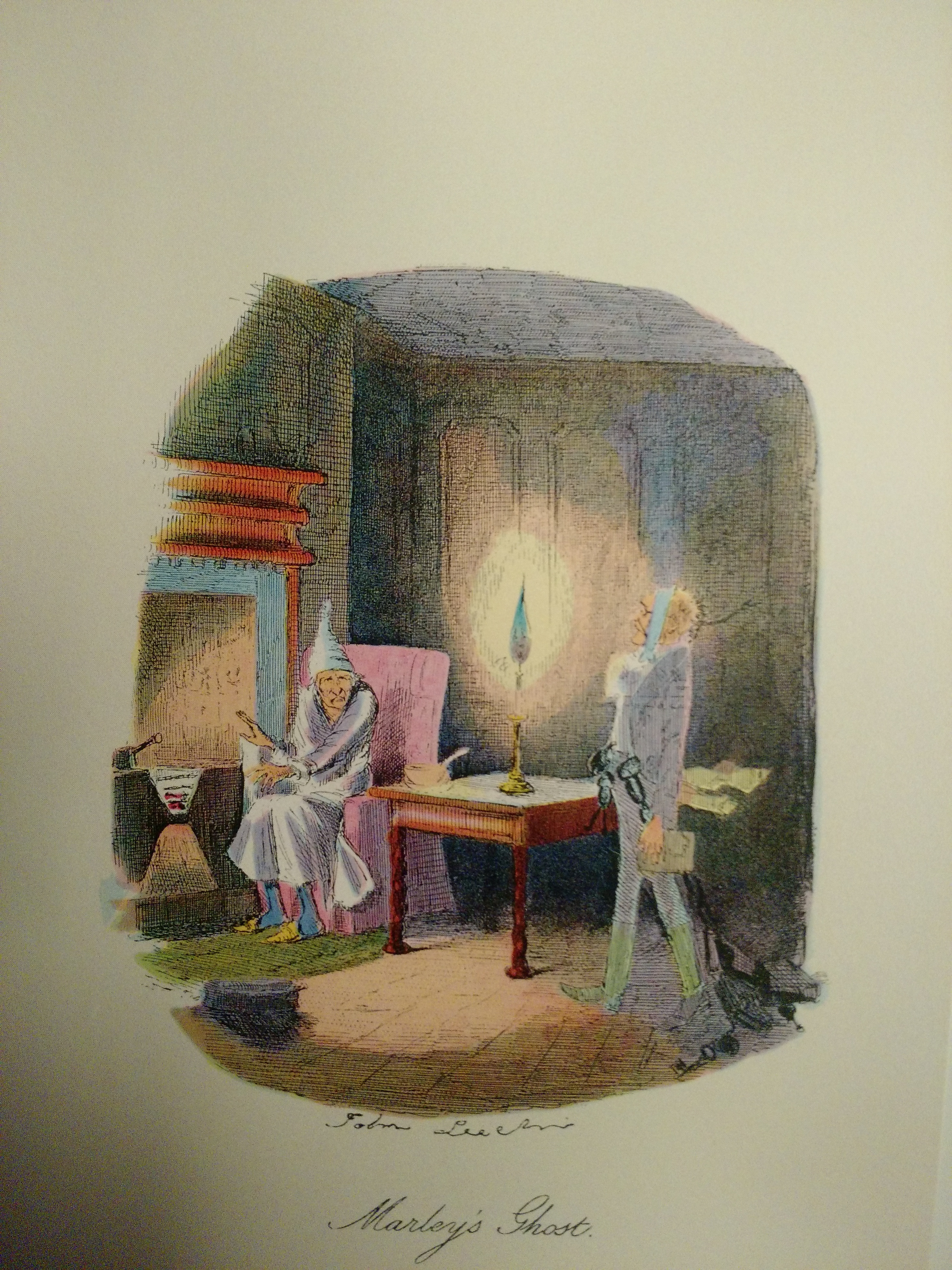 In addition to its rare and manifold medieval wonders, the Rossell Hope Robbins Library houses the Koller-Collins collection, which contains texts across several periods and disciplines in English Literature and serves as a reference collection for graduate study.  Koller-Collins books have several unique bookplates, which help us to differentiate them from the core collection of Robbins—in addition to being lovely to look at! 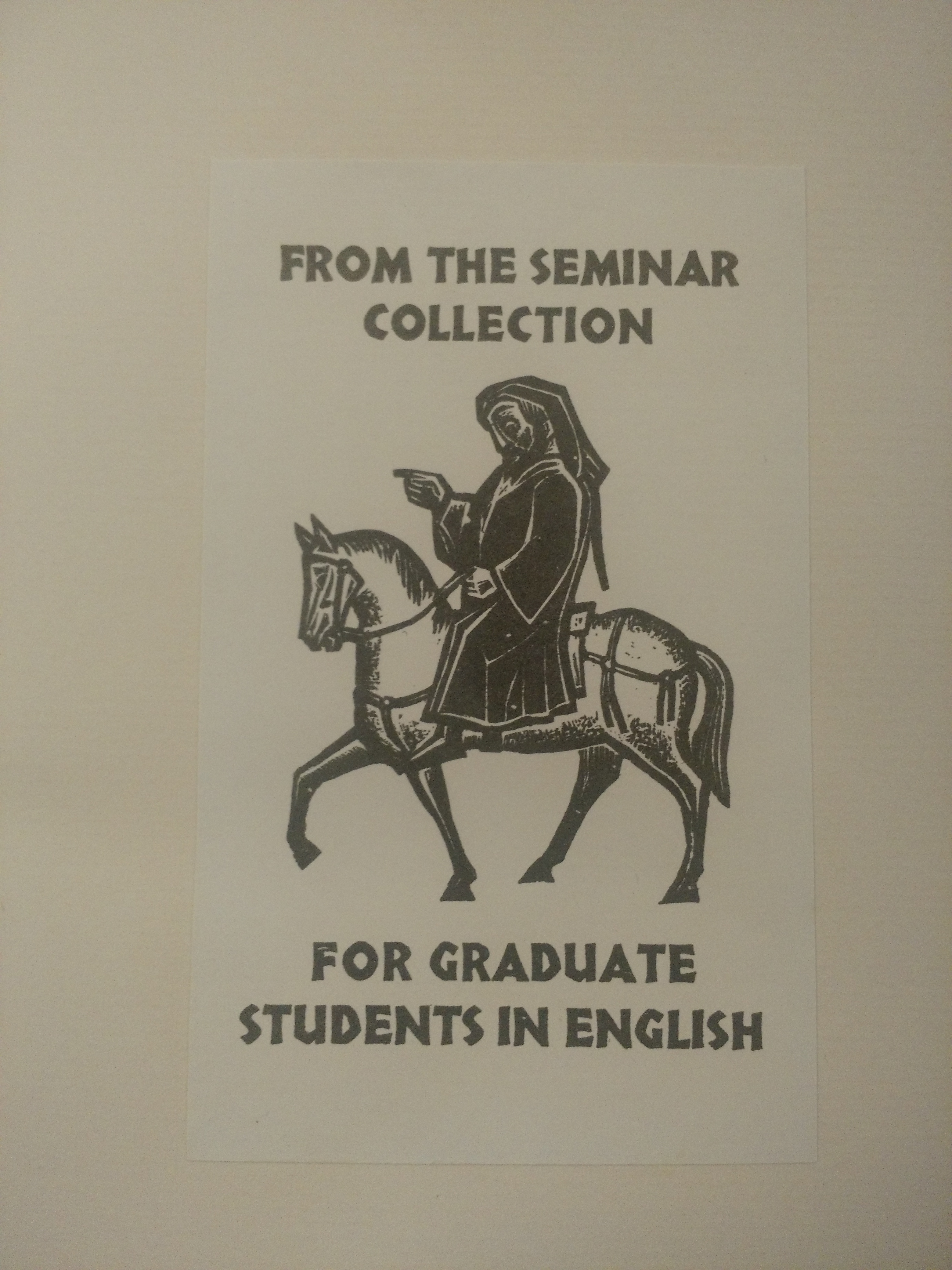 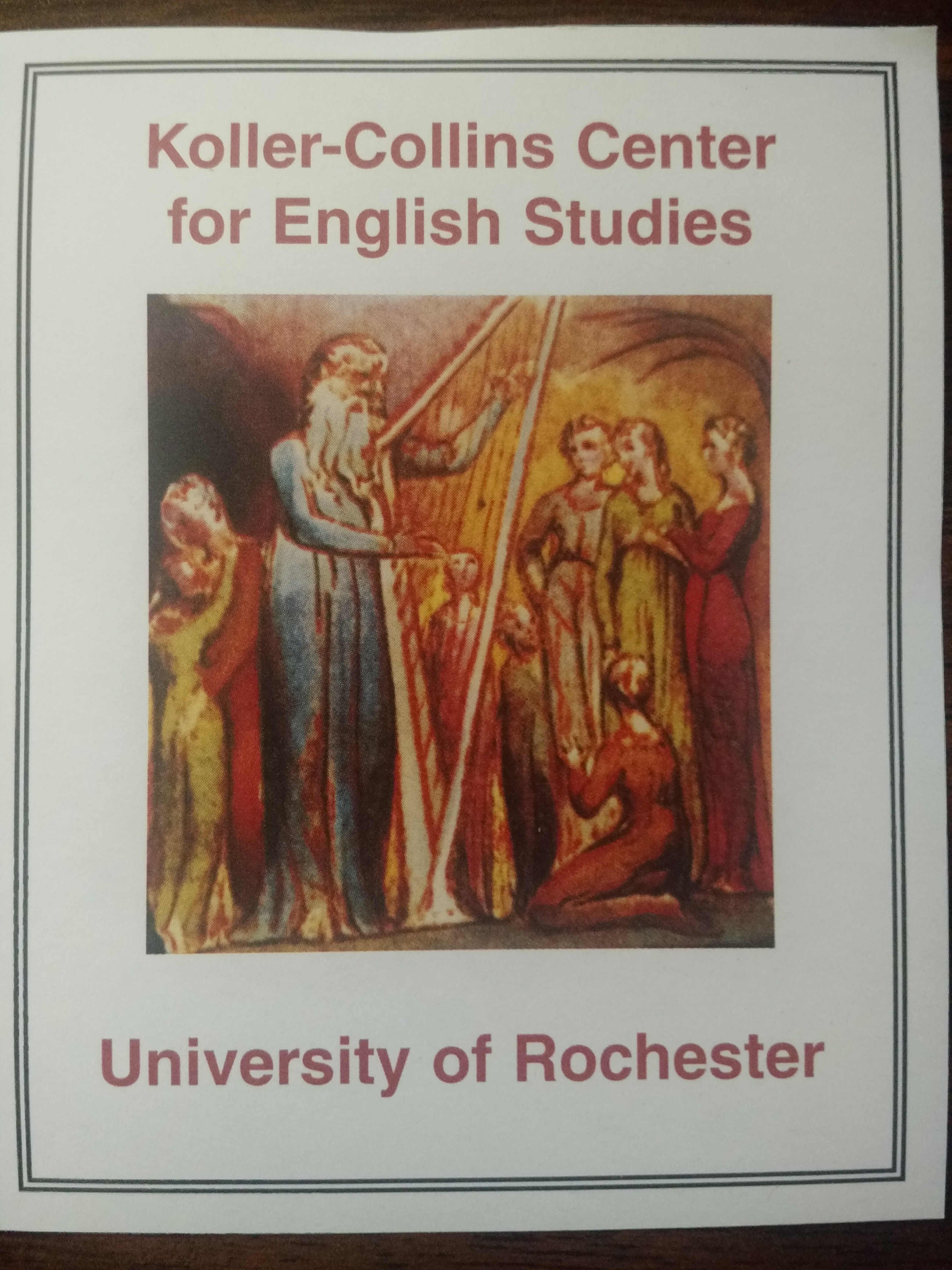 Alongside several handy anthologies of criticism and bibliographies of periodicals (and the like), a diligent explorer may find in Robbins a series of impeccably maintained century-old Scribner’s editions of The Works of Charles Dickens: In Thirty Four Volumes. 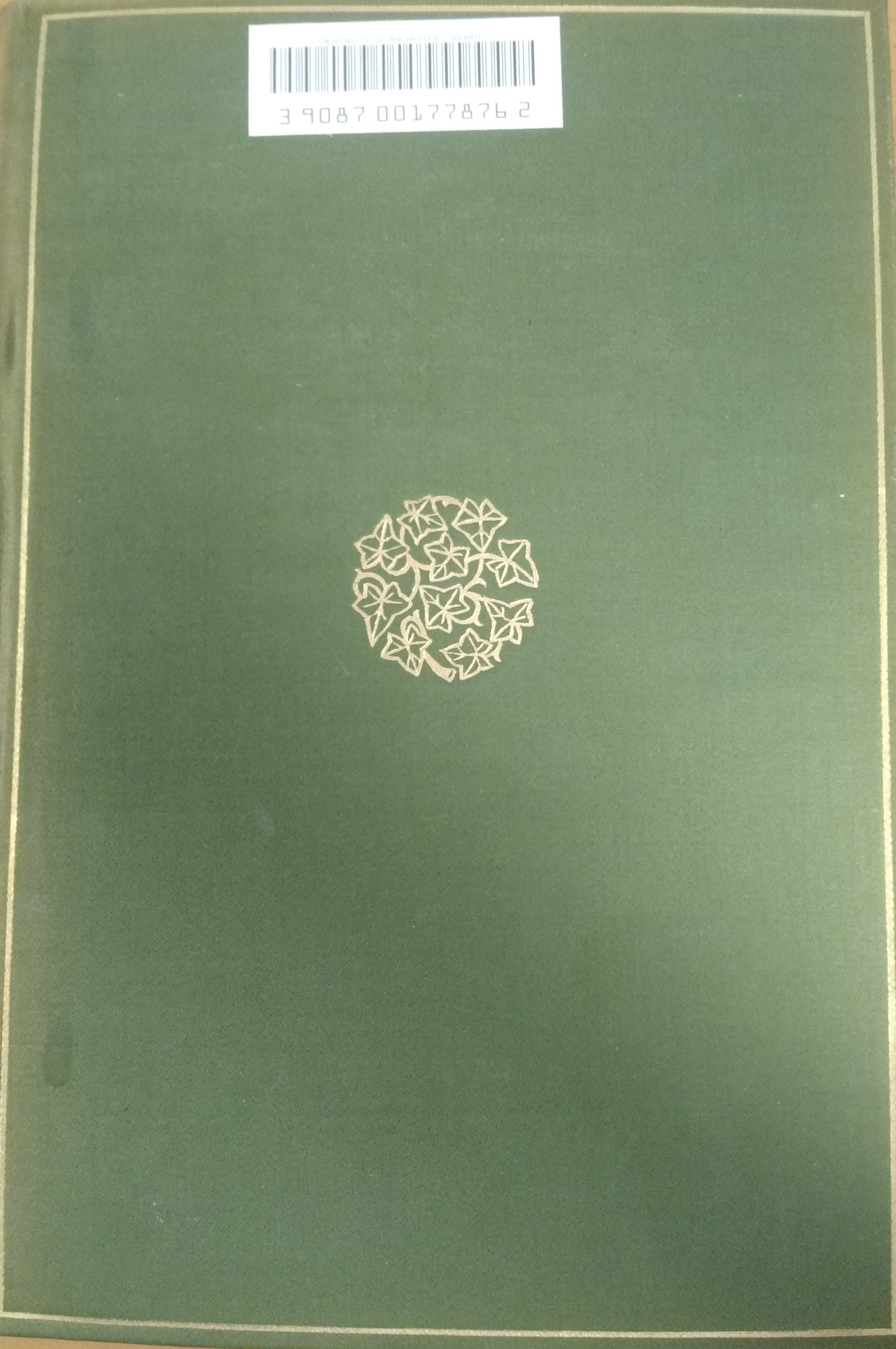 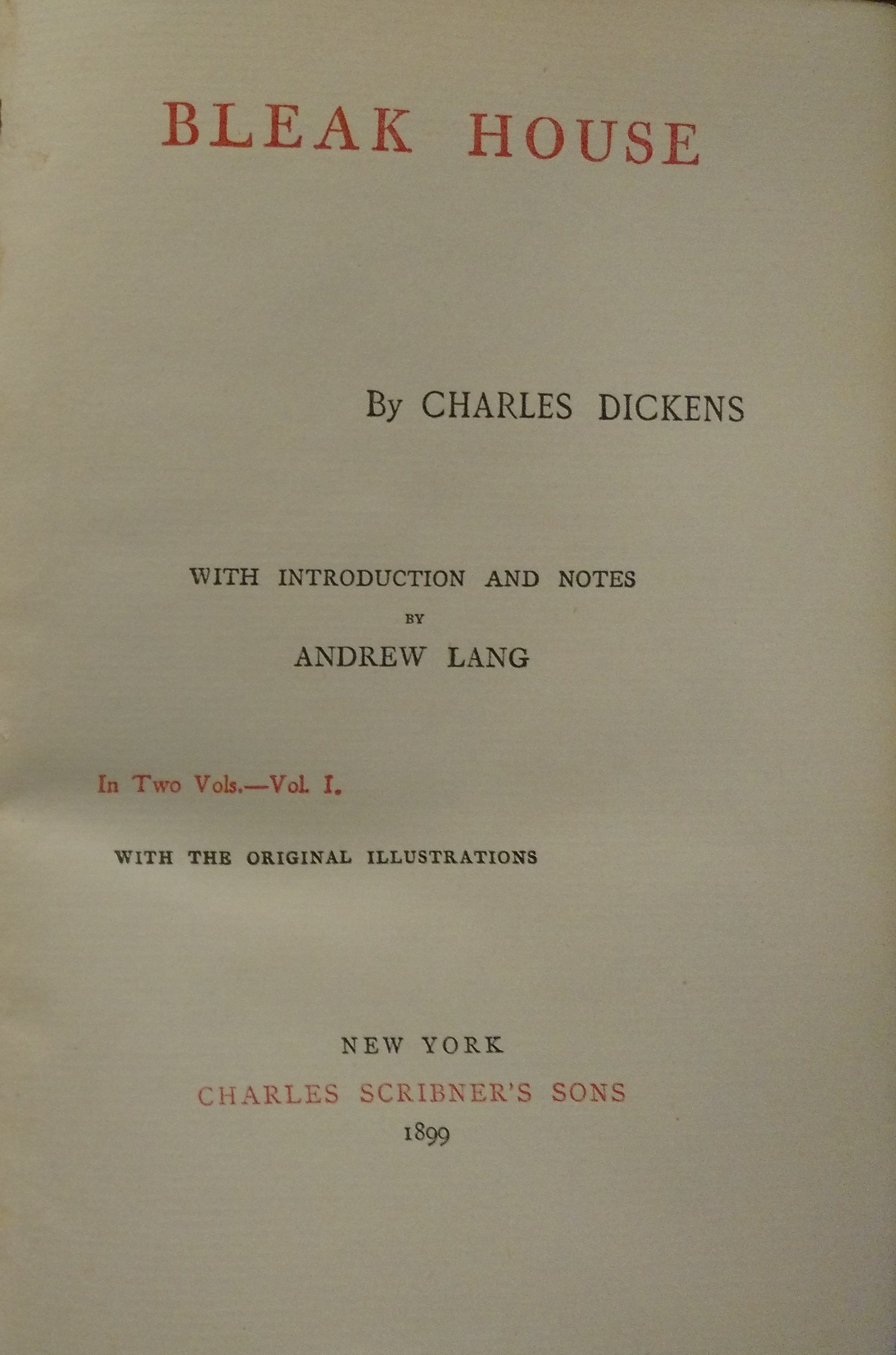 The books contain the original illustrations that Charles Dickens and Hablot Knight Browne (Phiz) collaborated on, and in the case of this particular edition, one can spend hours examining the vast differences between Phiz' usual style 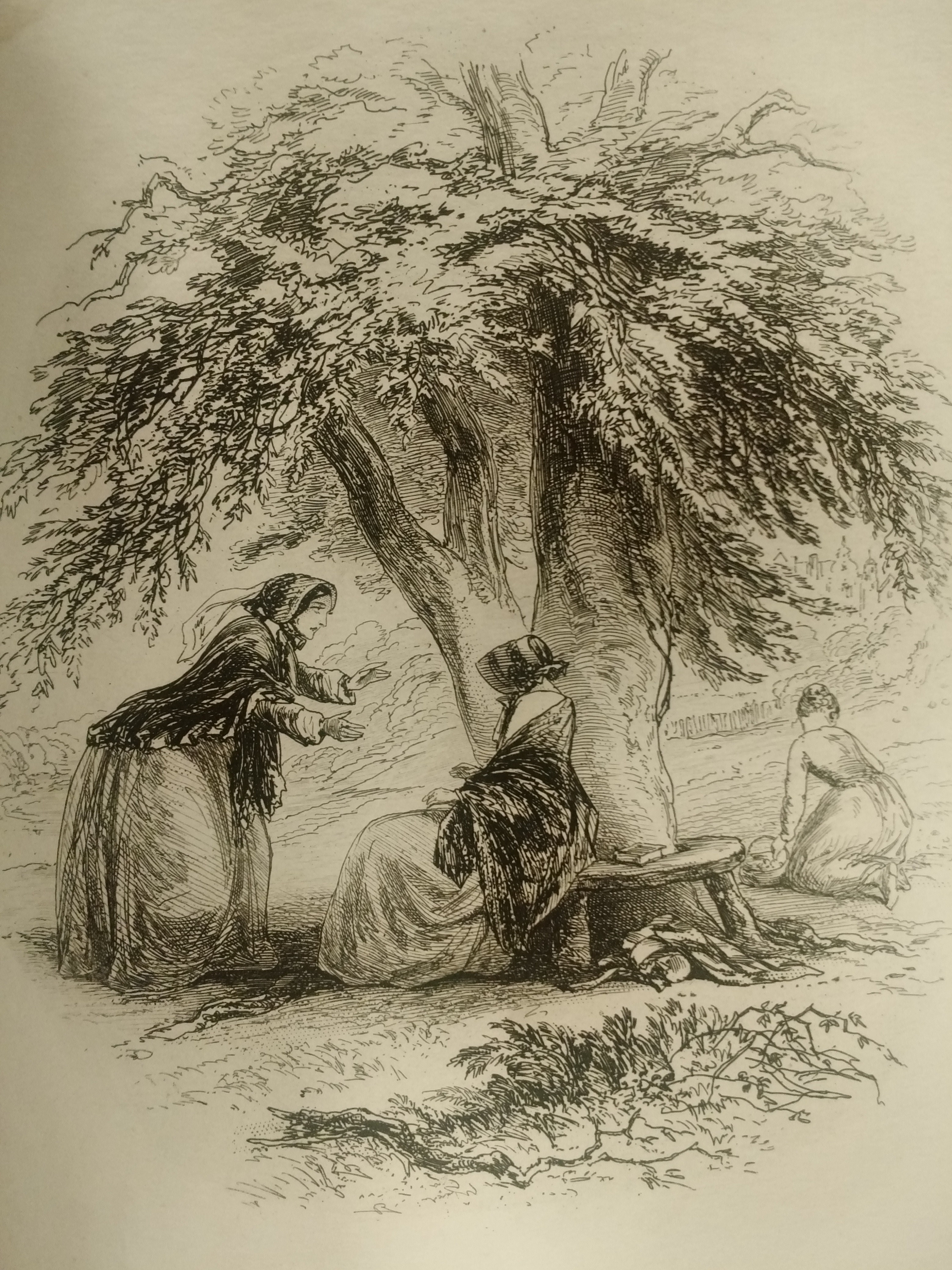 and the "dark plate" illustrations 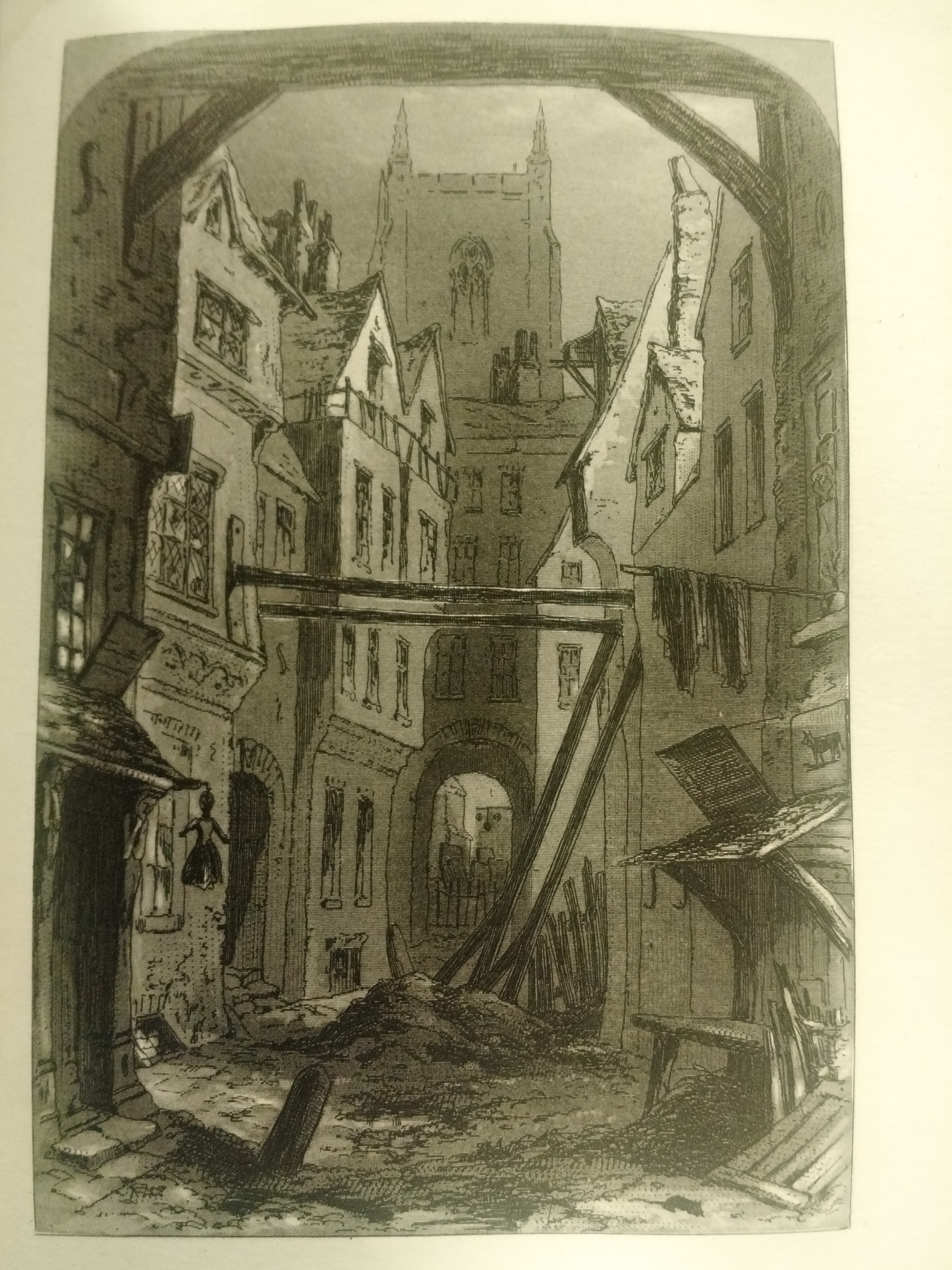 that he invented especially to communicate the gloomy, infectious, and contaminated atmosphere of this novel.

Dark plate illustrations derived their uniquely foggy and indistinct appearance from extremely fine crosshatch patterns inscribed over the plate in order to enhance a sense of mystery[1].  The Scribner’s edition is remarkably faithful in reproducing the illustrations and Dickens' own image descriptions, thus making it an invaluable resource for research in book history and material culture.

The books not only contain the original illustrations and introductory notes by Andrew Lang, the celebrated 19th-century novelist, critic, and anthropologist who was deeply fond of Dickens’ work, but also proclaim their editorial pedigree. 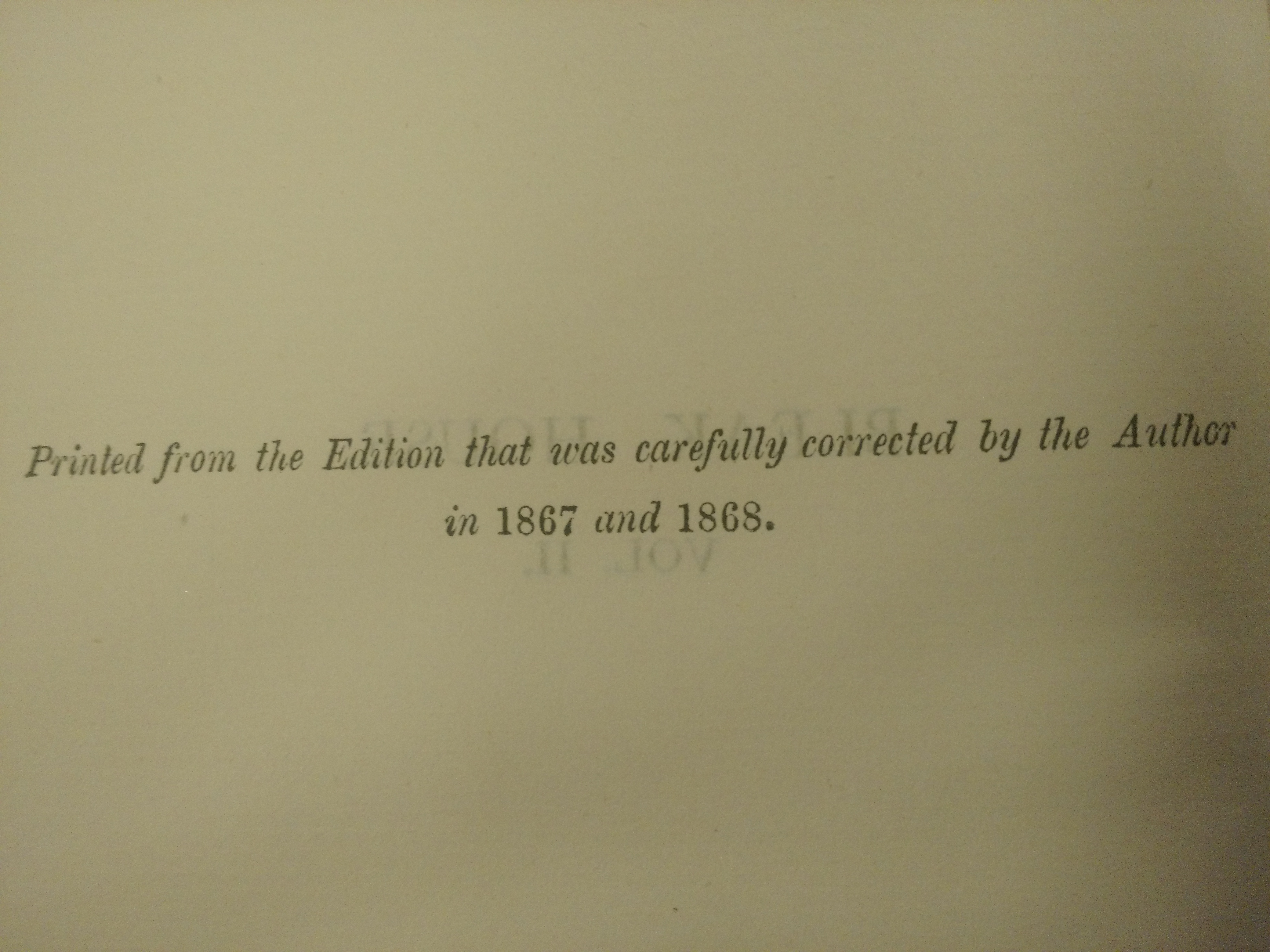 The claim of authorial intention is particularly interesting in this case, since Charles Scribner’s Sons published this edition in New York in 1899. Scribner’s enjoyed a major literary reputation at the turn of the 20th century for collaborating with authors such as F. Scott Fitzgerald, Edith Wharton, and Ernest Hemingway for playing a decisive role in the transformation of modernist aesthetics. Thus, their attempt to draw a direct line of descent from the peak moment of imperial London to New York in the 1900s through the transmission and publication of Dickens’ novels with their “original” illustrations gesture towards emergent material, cultural, and geopolitical networks that have shaped the history of the 19th and 20th centuries.

Dickens’ influence, both as an author and a performer, on the American reading public has been the topic of several fascinating scholarly works and exhibitions. Thousands of fans flocked to his performances in London, Dublin, and New York, applauding and gasping at the twists and turns of his plots and even weeping copiously at the emotional power of his delivery. A few months ago, the Pierpont Morgan Library curated an exhibition centered on their original manuscript of A Christmas Carol, offering for public view various print ephemera such as reading tickets, visiting cards, corrected proof copies, and other fascinating relics of this integration of literary-theatrical performance[2].

It so happens that the Koller-Collins houses a facsimile of the manuscript held at the Morgan, complete with a detailed transcription and John Leech’s original illustrations. 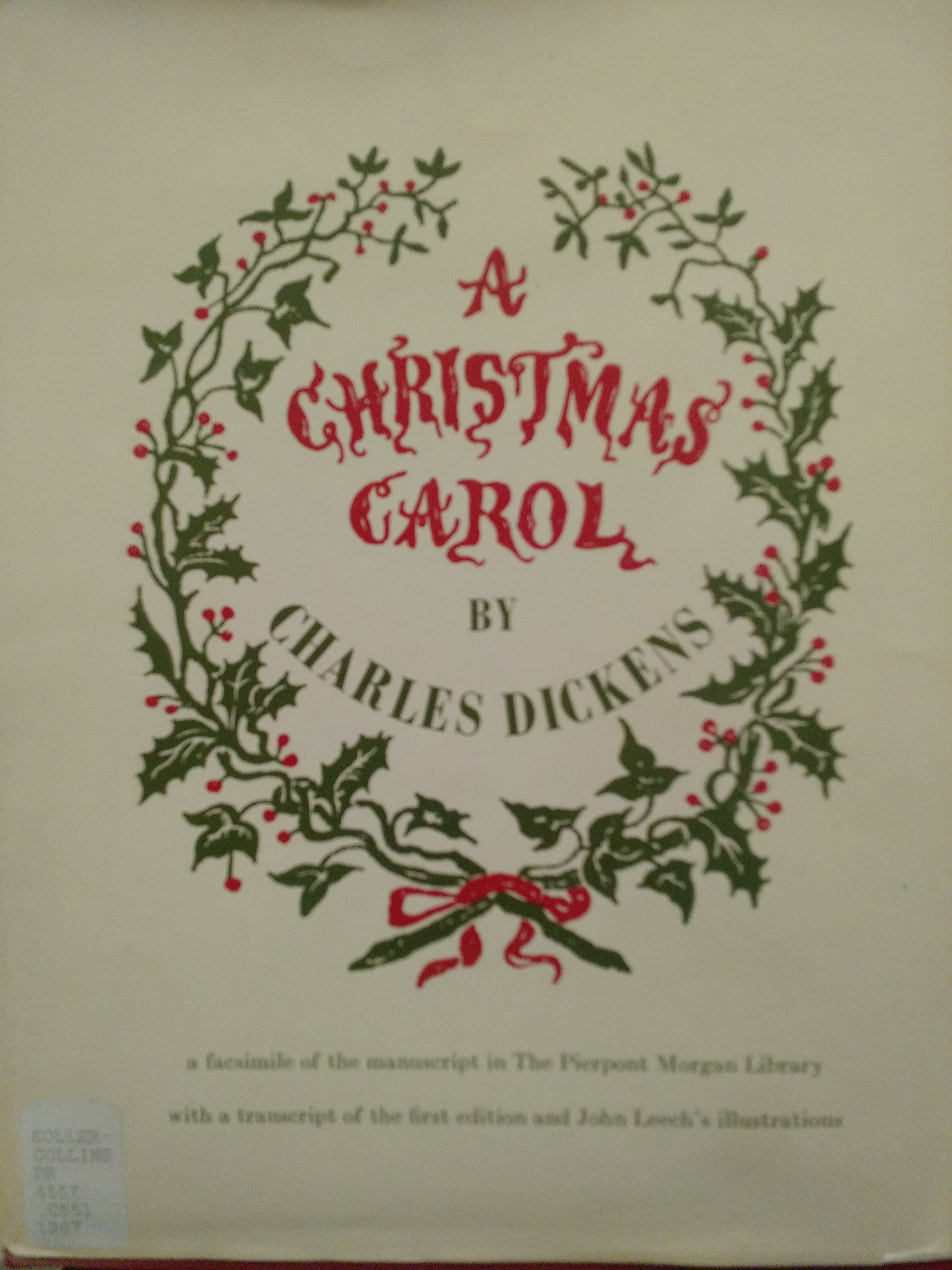 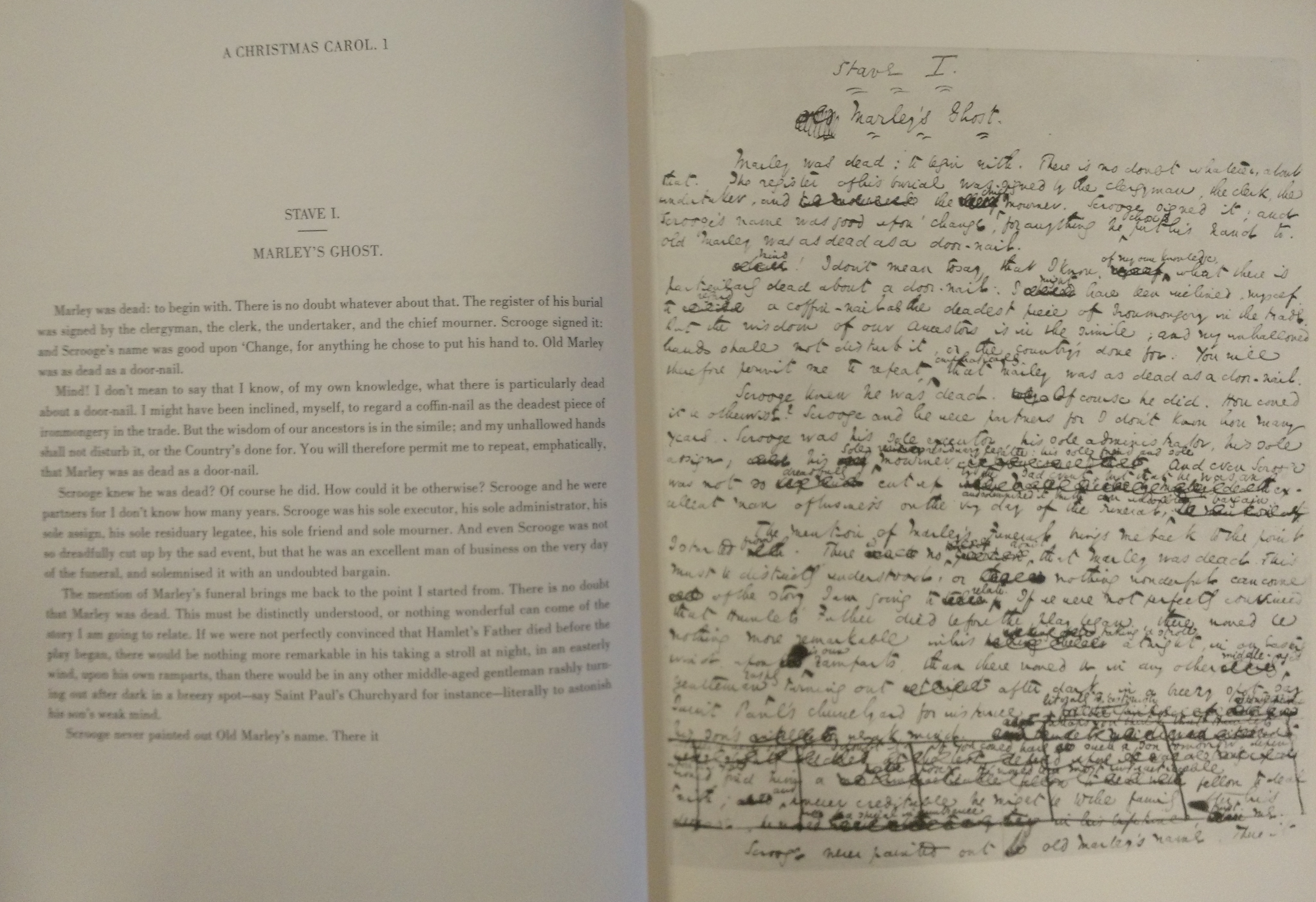 A cursory glance at the two books before me—the Scribner’s Bleak House and facsimile edition of A Christmas Carol—is enough to remind us of the variety of illustrators and visual technologies that Dickens collaborated with in his lifetime.

This edition was published in 1967, and it’s fair to say that it was immediately acquired for the Koller-Collins collection. How do I know that? Funny you should ask, because the most interesting little detail about this volume is that it contains a touching inscription to Rowland Collins himself from his brother: 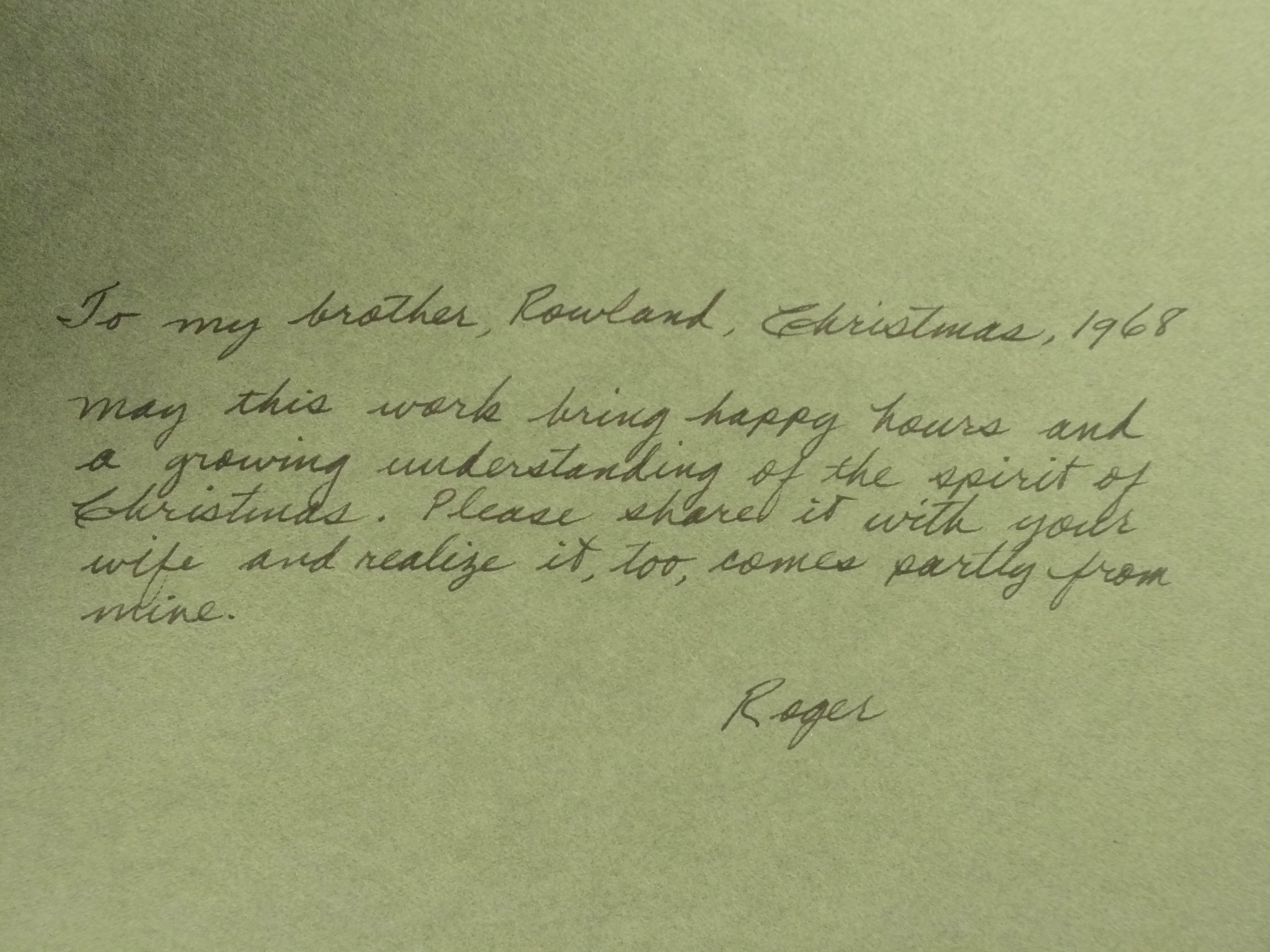 May this work bring happy hours and a growing understanding of the spirit of Christmas. Please share it with your wife and realize it, too, comes partly from mine.

This endearing (and rather strange) piece of Robbins history illuminates a fundamental aspect of interacting with the Robbins and Koller-Collins collection—what is most attractive about this library, even more than its voluminous reference collection, is its irreplaceable personal touch.