The University Portfolio, in Review

The recent transfer to the University Archives of a group of 19th and early 20th century stocks and bonds sheds light on the University's early investment decisions and the generosity of its donors. 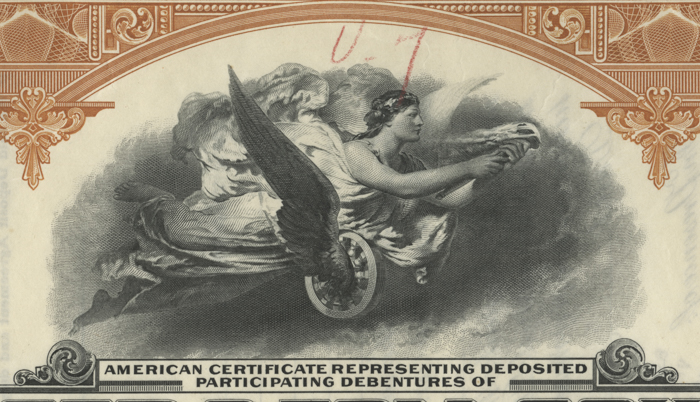 A group of stock certificates was transferred recently to the University Archives by Vini Falciano, University Director for Institutional Research, who found them while moving offices from Wallis Hall to College Town. You can read about them in the Winter 2019 issue of Rochester Review, and see the whole group below.

First is a bond to fund the construction of the Trans-Caucasus Railway Company. Fully guaranteed by the Imperial Russian Government, “The bearer will receive interest, at four per cent per annum,” at six-month intervals beginning in July 1900 by presenting one of the 40 coupons attached to the page (three coupons remain). The bonds would be redeemable at their face value—$1,000 in gold—after 1915 according to a lottery drawing of the number assigned to the bond (this one is number 3861).  There are no ownership markings on the sheet, and it does not appear in any lists of securities found in the Archives.

The University treasurer’s annual report for 1916 does list other Russian bonds, maturing in three years and paying 6 ½ percent interest. A New York Times headline of January 11, 1918, reads, “Plan to Repudiate the Russian Debt; Bolsheviki Talk of Canceling All Loans and Bonds Held at Home or Abroad.” The 1919 treasurer’s report states: “The only securities in default either as to principal or interest are $10,000 Imperial Russian Bonds . . . which are now in the hands of a protectorate.” 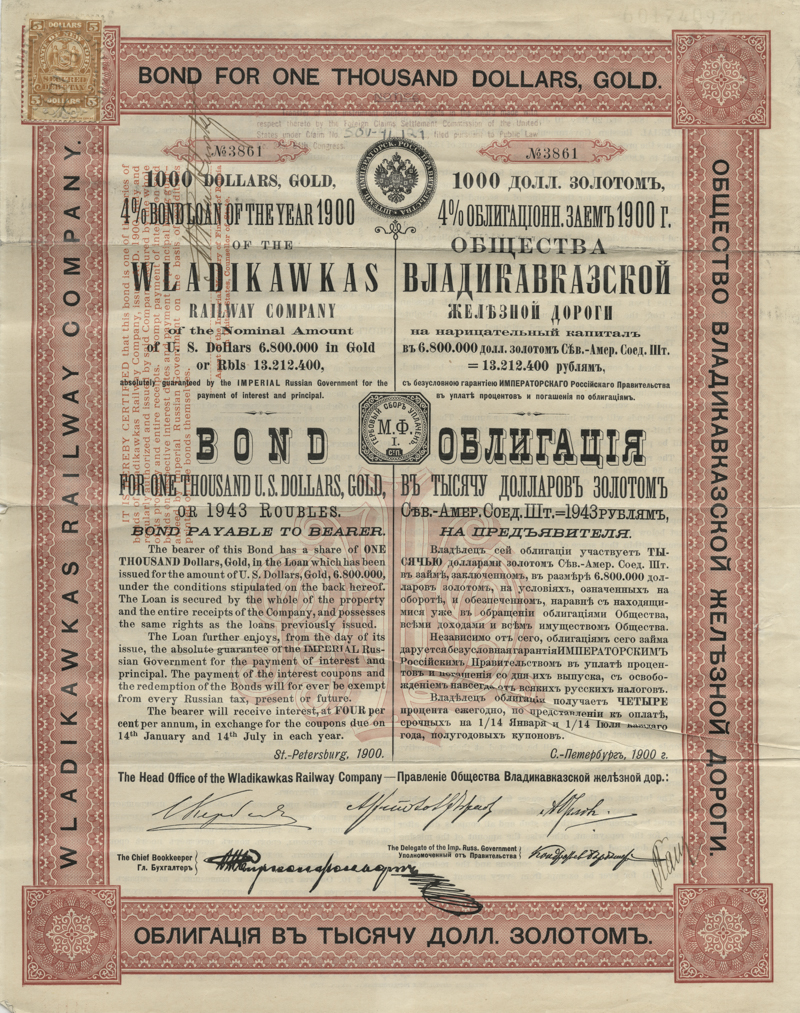 The January 2, 1928, Democrat and Chronicle reports that the Genesee Button Company was one of a number of firms lured to Rochester by the “New Industries Bureau” of the Chamber of Commerce. While Genesee Button seems to have been newly formed, its product was hardly a new industry in Rochester, the “button center of the United States,” nor was its president, Nelson Sage, a stranger to Rochester or buttons. His father, William Sage, served as the University’s treasurer from 1850 to 1890, and is the namesake of the Sage Art Center. Until 1926, the younger Sage was president of the Rochester Button Company. After it merged with two other button makers, he was replaced. It is not clear why he chose to associate with a new company to compete with the larger concern, but it was not a successful venture. By March 1932, the Genesee Button Company had folded.

The certificate was registered to the Schlegel Company in 1931. The Schlegel firm was founded in the mid-1880s in Rochester and made specialized textiles, from hem bindings for women’s dresses to decorative fringe for the canopies of carriages (and surreys) to machine-gun webbing during the Second World War. A gift from Helen Schlegel Moretz named Schlegel Hall, the home of the Simon Business School, in 1991. 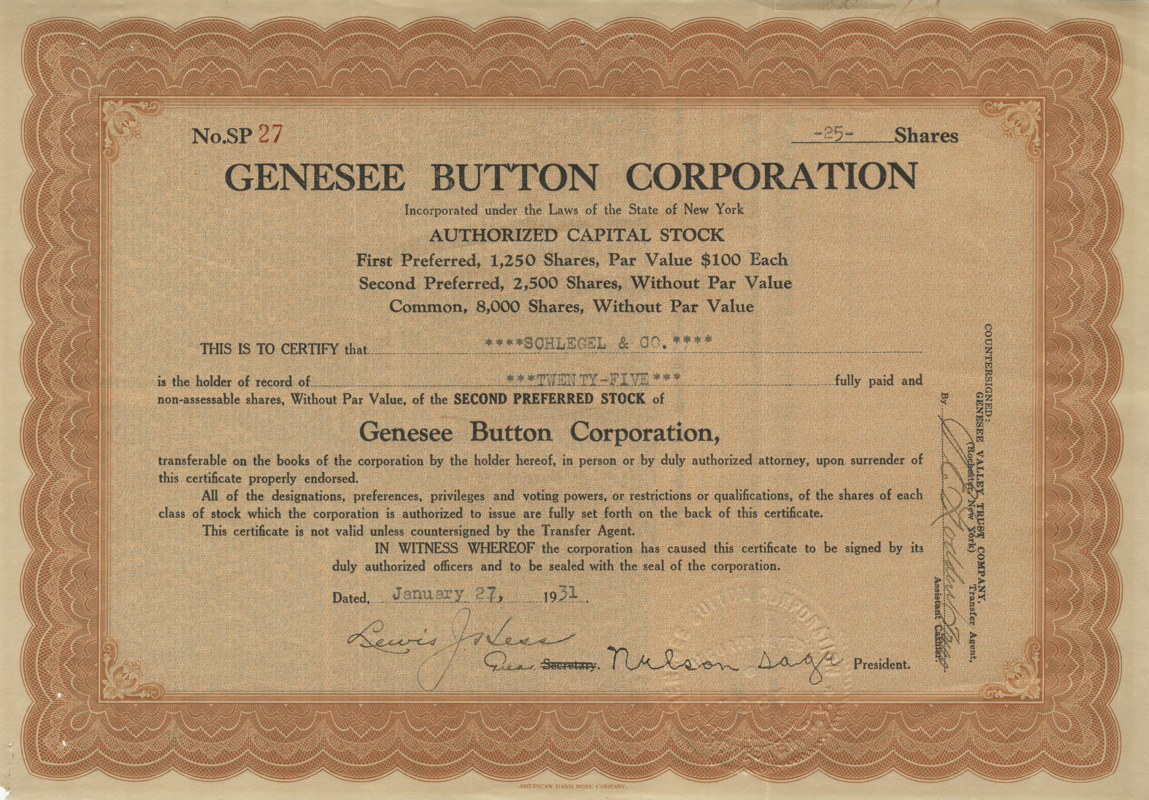 Eight months after the October 1929 stock market “crash,” the finance committee of the Board of Trustees signed an order to reduce the University’s holdings of Kreuger & Toll: selling $200,000 “Secured” shares and reinvesting a smaller amount in “American Certificates” of the same company. Despite the now clearer signs about the future of the market, the K&T stock was widely considered comparatively stable. Ivar Kreuger, the son of a match manufacturer, formed a company with Paul Toll in 1908 and bought the rights to use a reinforced concrete process in Sweden. Their construction business initially did well, but Kreuger focused on creating a worldwide match monopoly, and along the way speculated in currency and real estate on a massive scale, paying dividends too good to be true. It was not until almost a month after Kreuger’s March 12, 1932, suicide that his personal duplicity would be recognized. It would take five years to unravel most of his schemes. 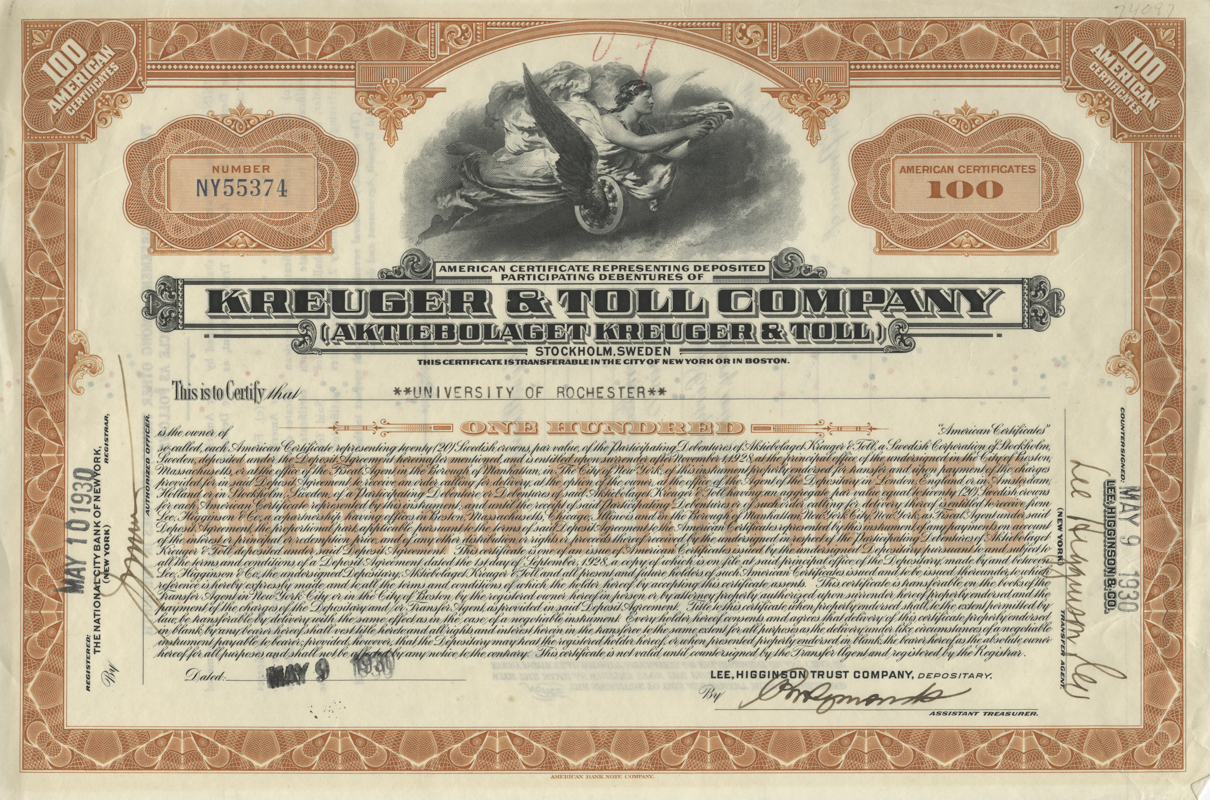 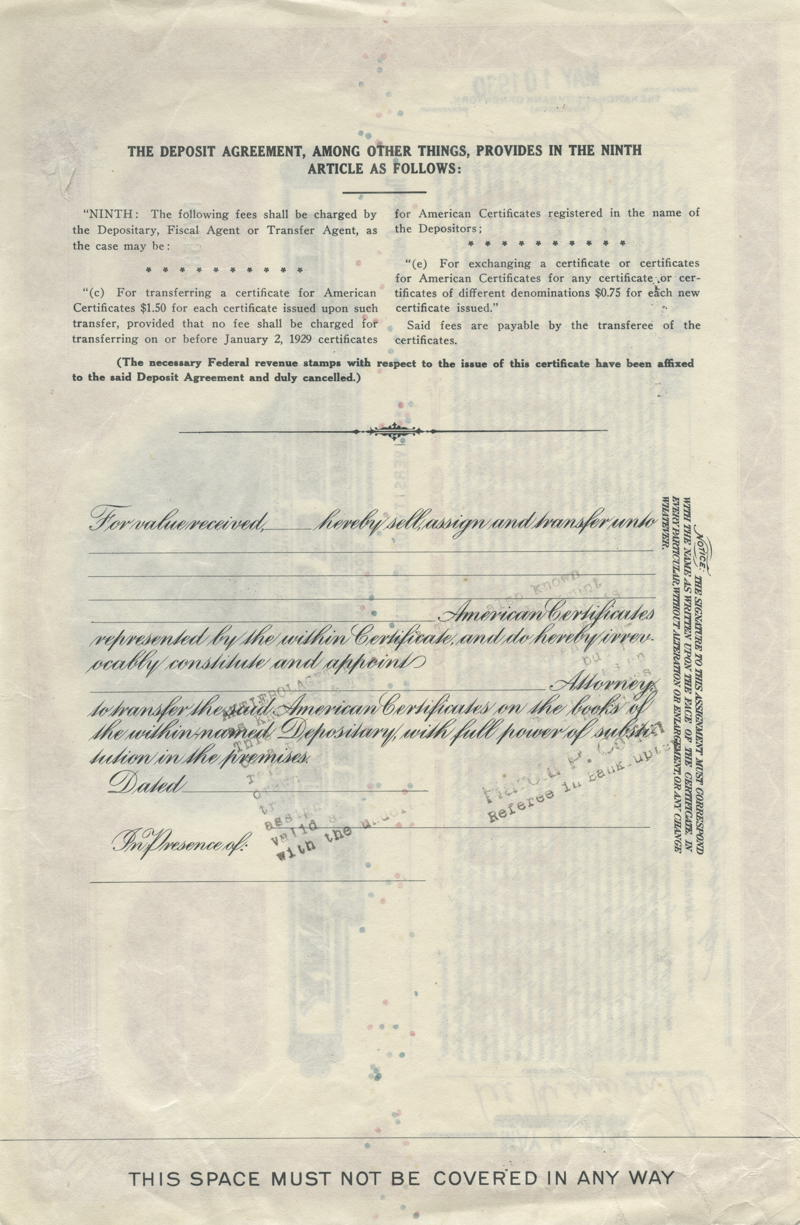 The two certificates below were owned personally by the University’s first president, Martin Brewer Anderson. In April 1881, he purchased 100 shares in the Tombstone Mill and Mining Company, which operated silver mines located in Arizona. Tombstone’s directors do not appear to have an obvious Rochester connection, unlike the executives of Anderson’s other holding in the Manhattan Construction Company. The president of that company was John Hall Deane, Class of 1866 and a University trustee from 1879 to 1923. Deane is remembered today for the professorship held currently by Russell Peck, the John Hall Deane Professor Emeritus of Rhetoric and English Literature. President Anderson and his wife Elizabeth died within a few weeks of each other in 1890; the University was the main beneficiary of the Anderson estate 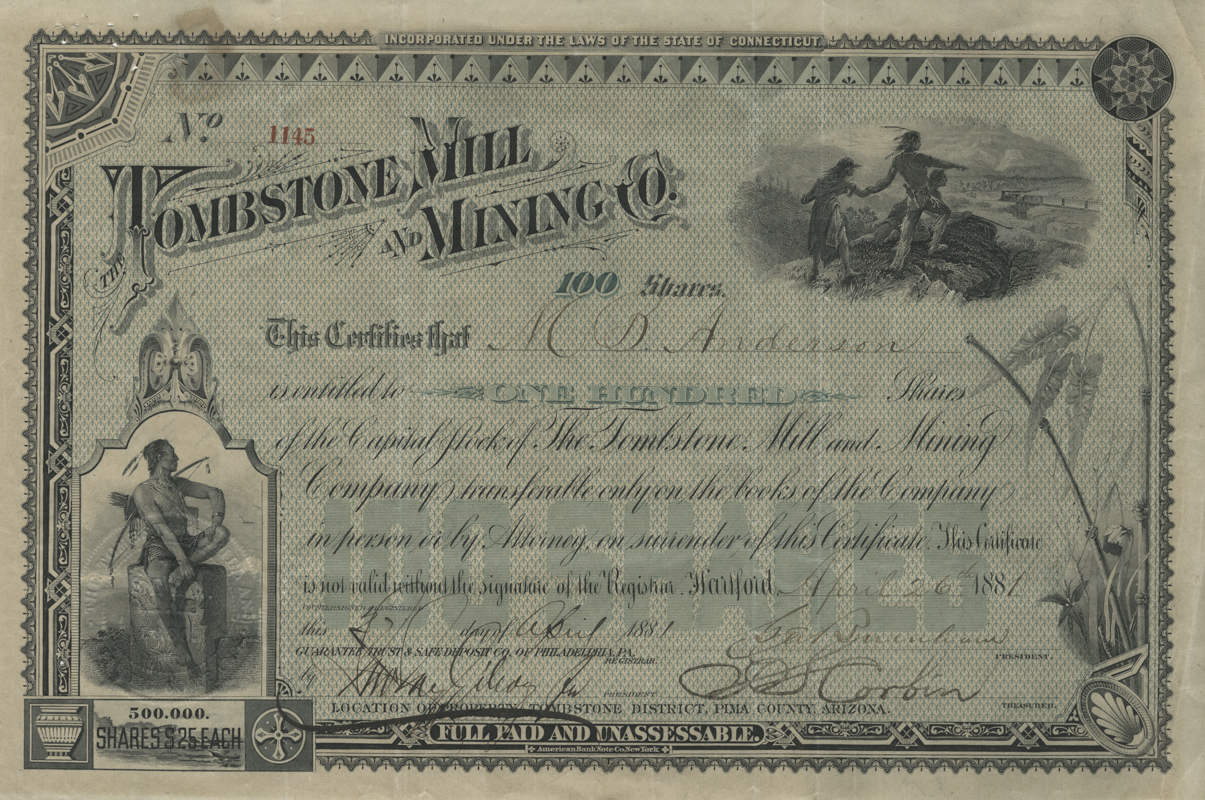 The verso of this certificate shows that the executors of the Anderson estate were William Wallace Gilbert, the Andersons' nephew, and Charles M. Williams, University Secretary. 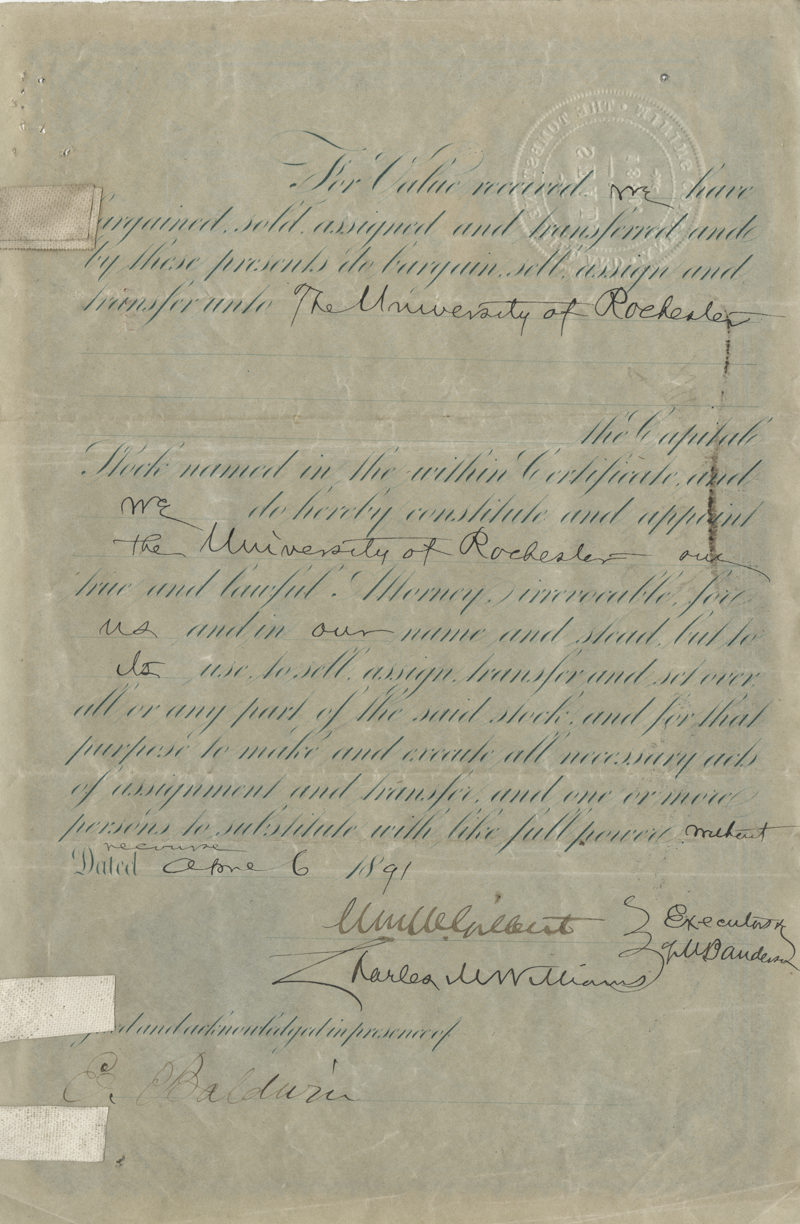 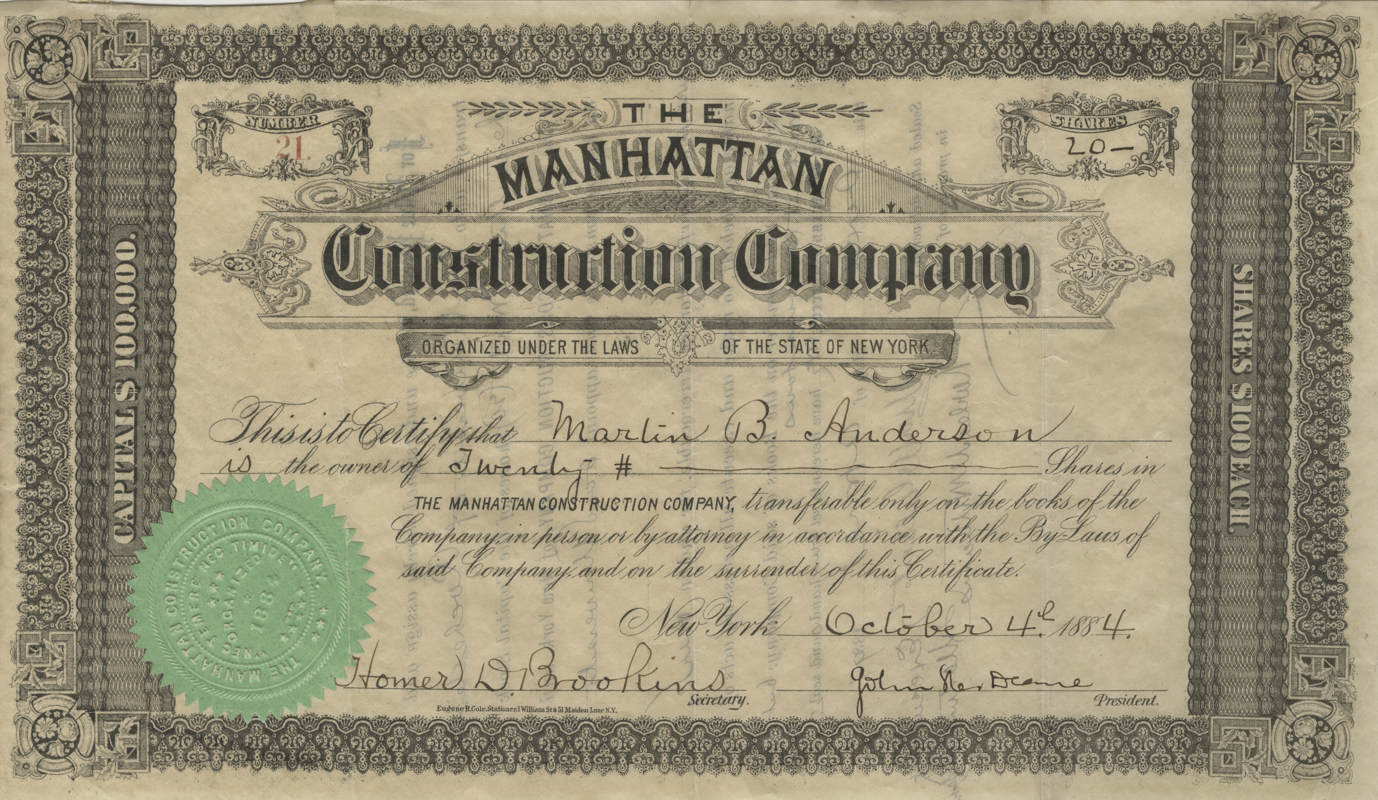 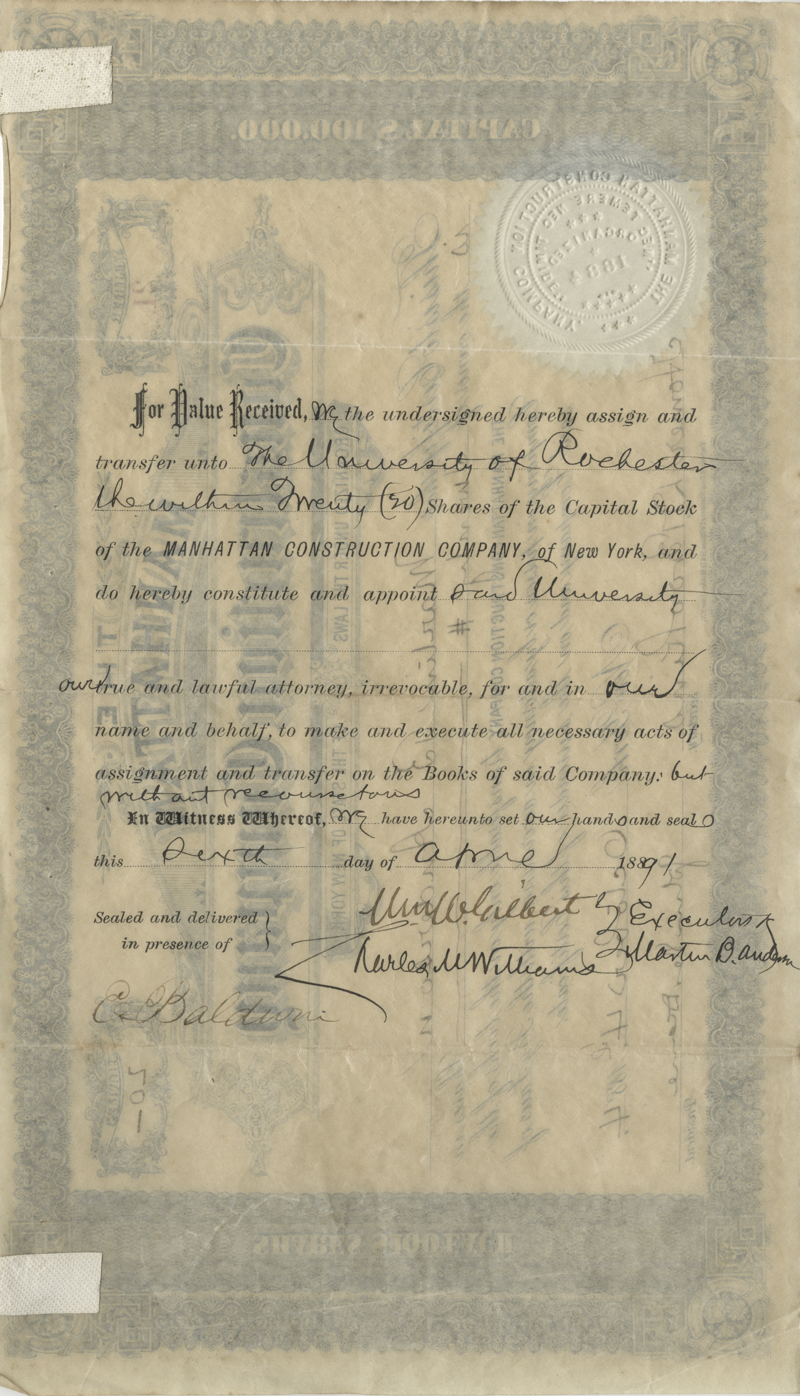 In 1851, Mary Steele married Lewis Henry Morgan, noted lawyer and scholar. Three years later, she purchased a home for the family on Fitzhugh Street in Rochester with money inherited from her father. Her stocks, both acquired after her husband’s death in 1881, are also for shares in mining companies, one located in South Dakota, the other (again) in Arizona. The Morgan estate was left to the University for the specific purpose of funding women’s education. 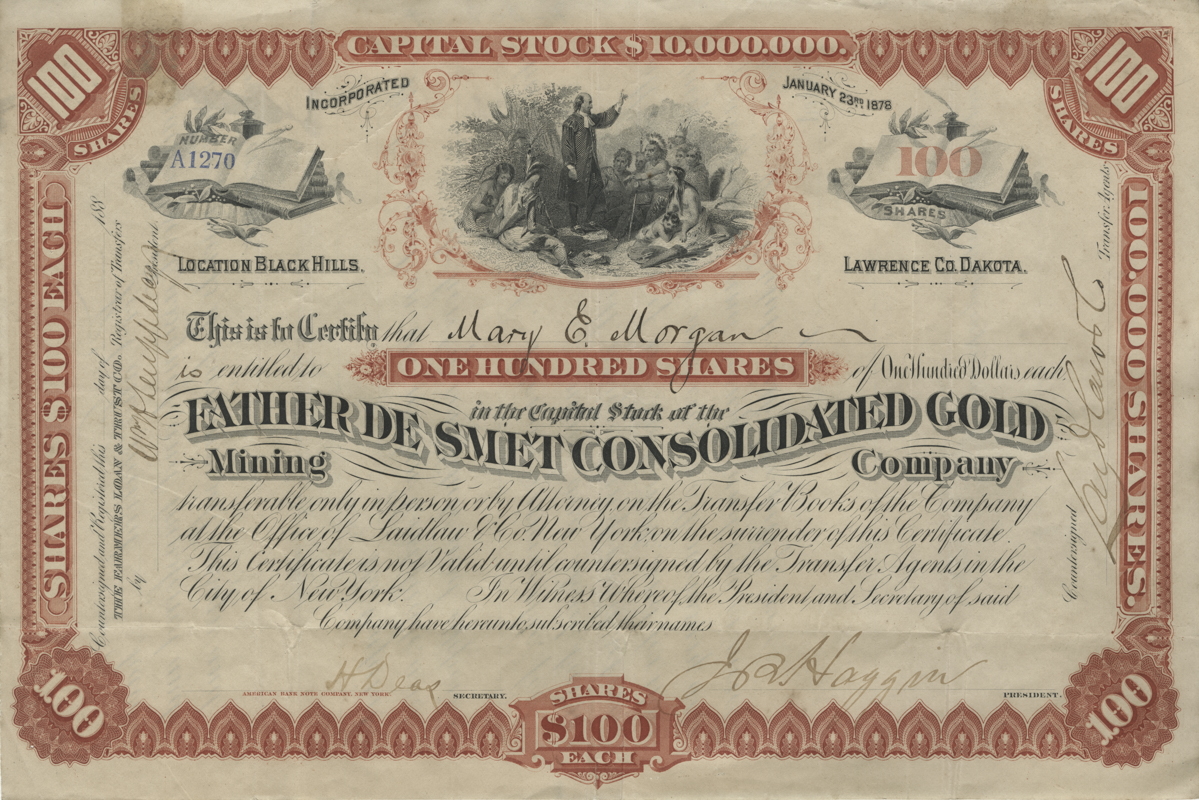 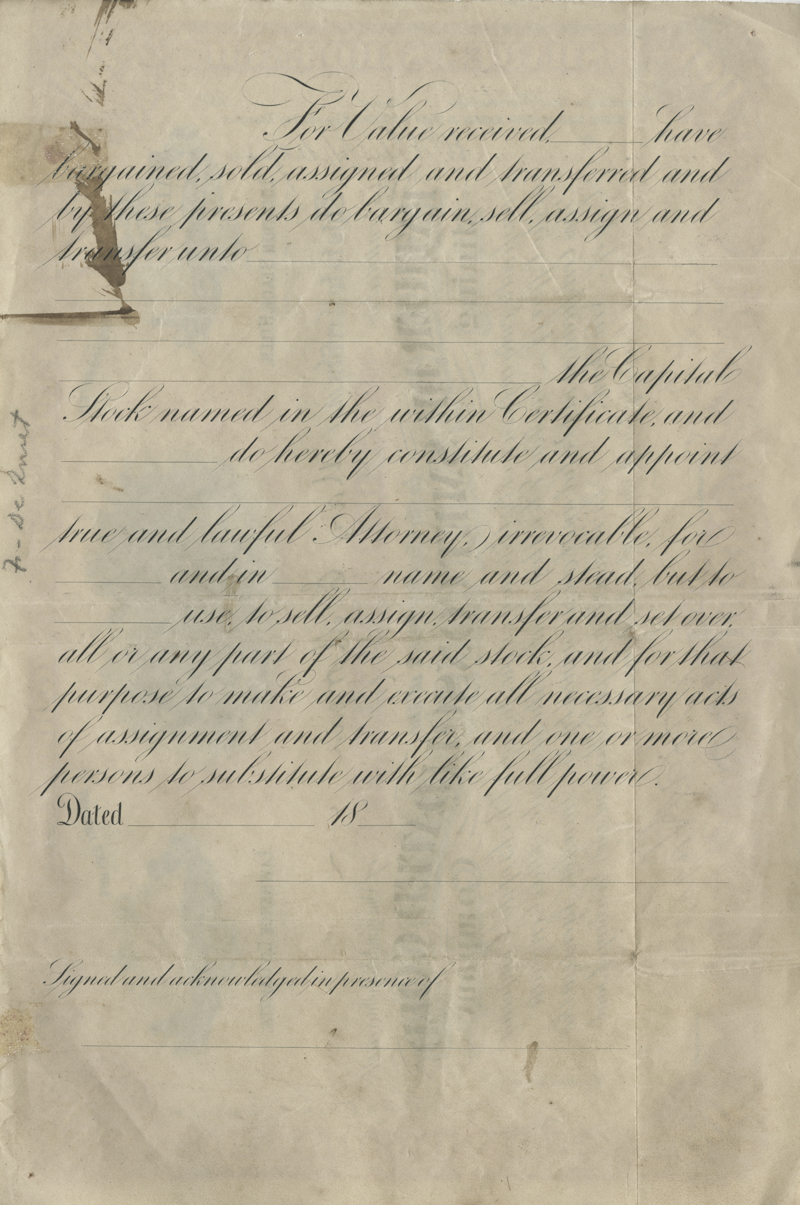 Carrie Rice owned 8 1/3 shares in the Niagara Falls Tunnel Land Company. She was born and raised in Brockport, NY, and married Levi W. Rubenstein, a jeweler. She lived in New York City until her death in 1954. She is buried in Mt. Hope Cemetery. Her will established the Fannie and Henry Rice Scholarship (named to honor her parents) "to provide scholarships to students in need of financial assistance." 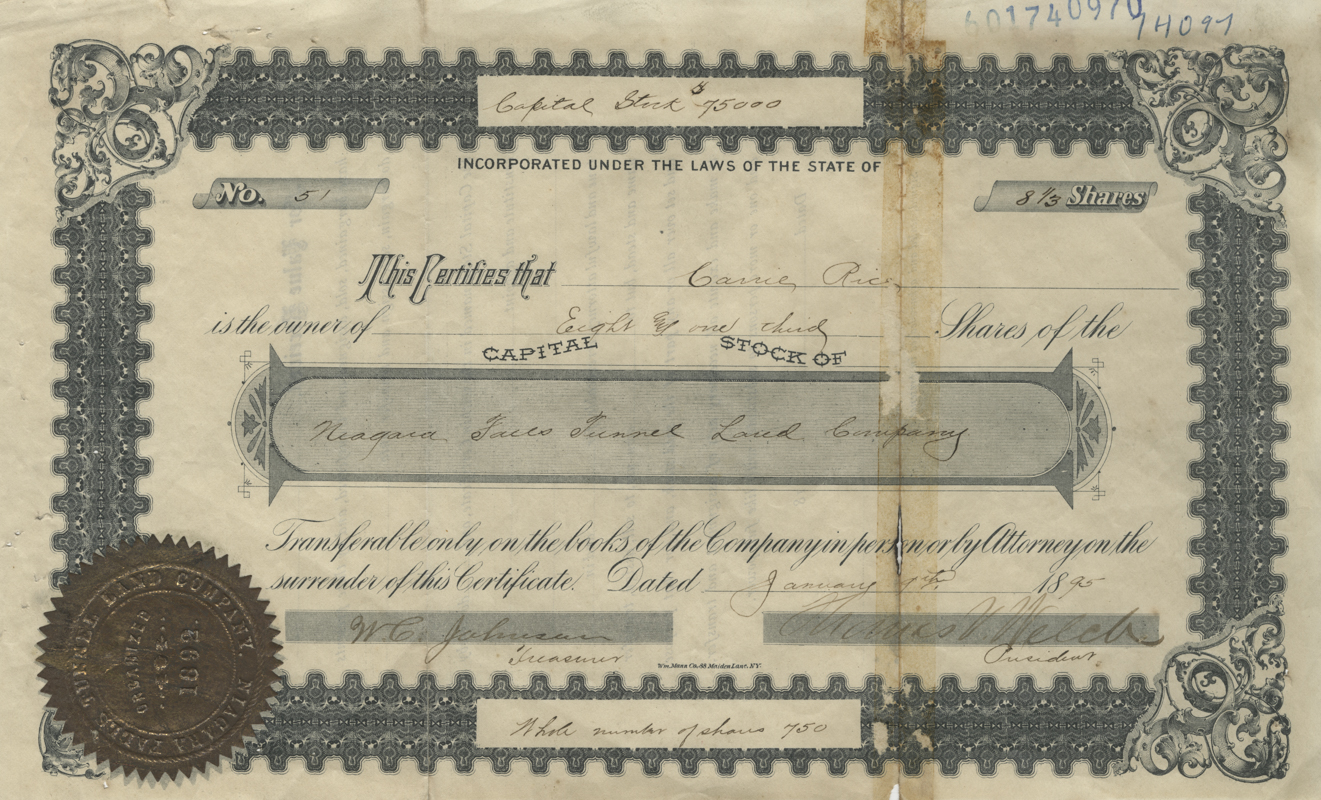 The companies whose certificates are registered to the estate of George Eastman combine two of his great passions. The Martin Johnson African Expedition Corporation was an investment in the work of Martin and Osa Johnson, professional filmmakers, explorers, and longtime friends who accompanied Eastman on his 1926 expedition to Africa. Some of their footage would be shown at the Eastman Theatre, and later in educational films distributed by the other company in the “portfolio,” Talking Picture Epics, Inc. 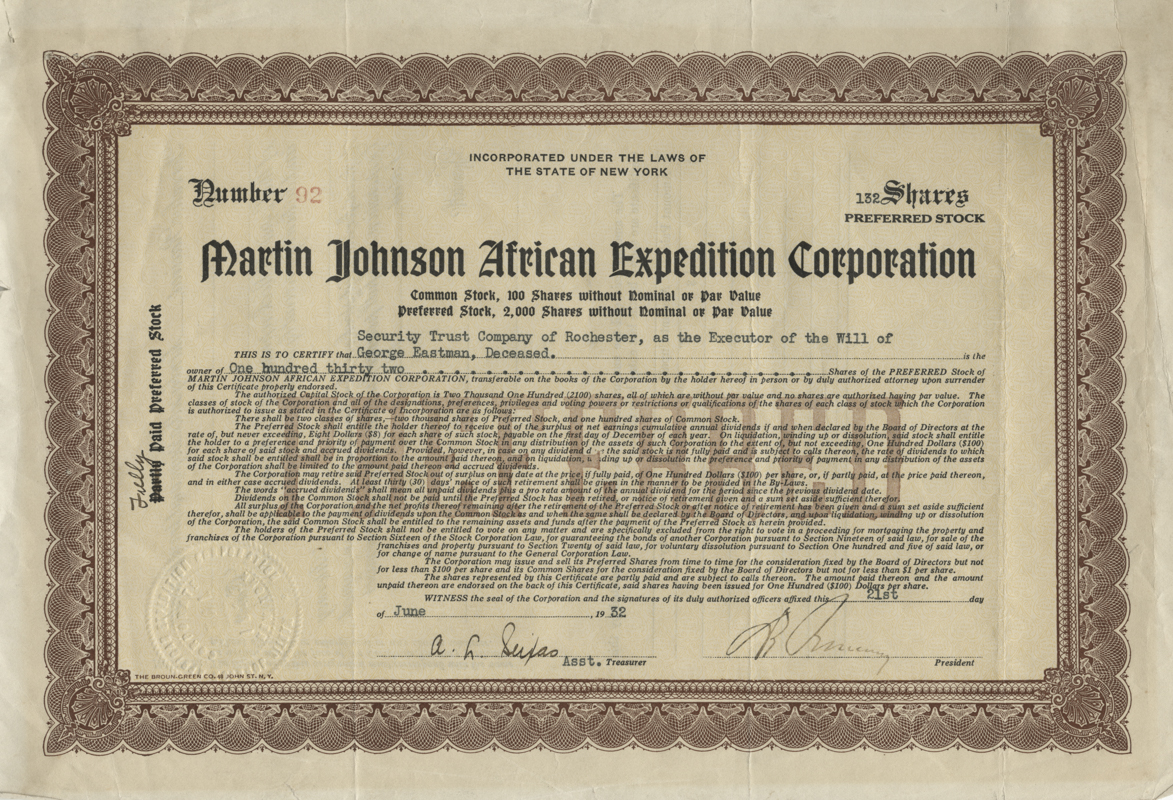 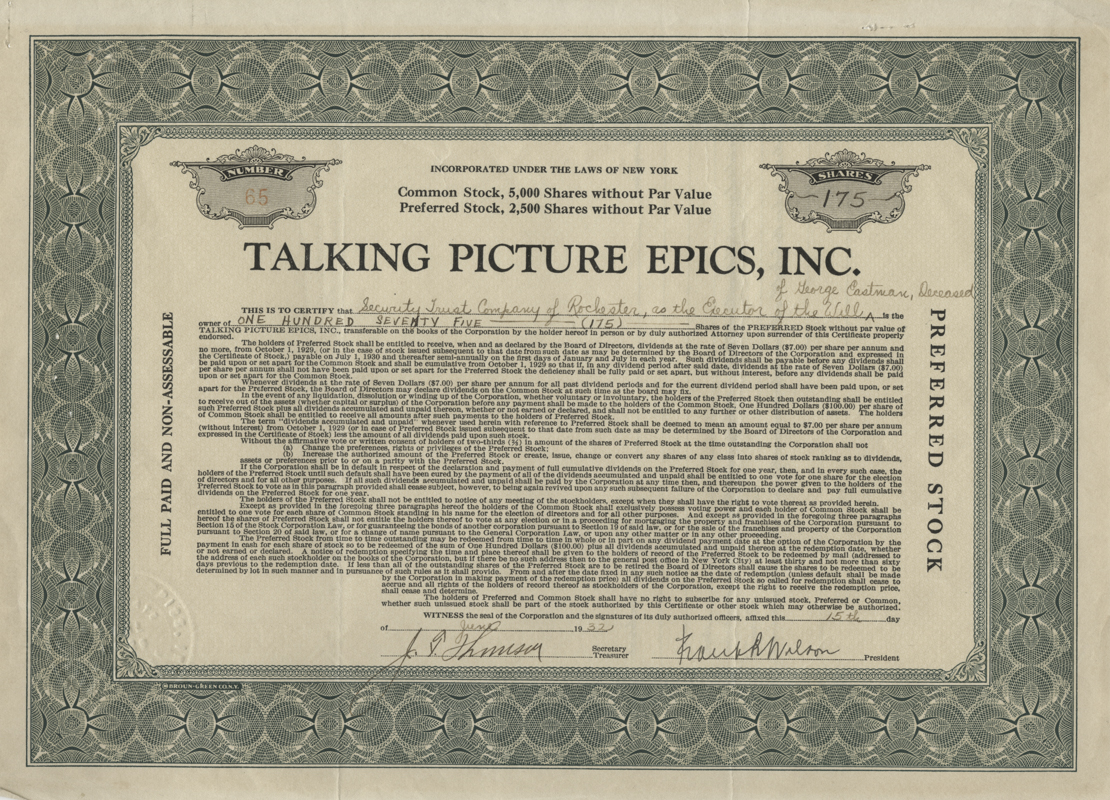