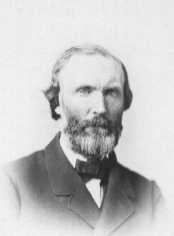 "The college president is expected to be a vigorous writer and public speaker. He must be able to address all sorts of audiences upon all sorts of subjects. He must be a financier able to extract money from the hoards of misers, and to hold his own with the trained denizens of Wall Street. He must be attractive in general society, a scholar among scholars; distinguished in some one or two departments of learning; gentle and kindly as a woman in his relations to the students, and still be able to quiet a 'row' with the pluck and confidence of a New York Chief-of-Police."

In 1861 he oversaw the University's move to what later became known as the Prince Street Campus. At the time of his retirement in 1888, the University had three buildings and 172 students.

Prior to Anderson becoming President in 1853, the leadership of the University was undertaken by Ira Harris, who served as Chancellor, a position later held by W. Allen Wallis one hundred and twenty years later.

No dormitories were built during Anderson's tenure as President. He regarded them as places with "every facility for the propagation of evil principles and habits." Instead, students found housing with Rochester families, and occasionally even lived temporarily with Anderson and his family. The President's House on the Prince Street Campus stood at 440 University Avenue.

Anderson Hall was the first building erected on the Prince Street Campus. When it was being built in 1861, President Anderson used a hammer to "test" the blocks of stone being used in the construction. This apparently annoyed the contractor, but Anderson was undeterred; the first UR president later told Professor Fairchild (who donated the hammer to the University Archive) that he "stuck to the job." Anderson Hall stands firm to this day, although it is no longer owned by the University. 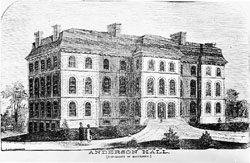 The cost of Anderson Hall was approximately $38,000, and from the start was named for President Anderson. A trustees resolution at the time stated that "...the new home...mainly obtained by the zeal, the labors, and the self-sacrificing spirit of its noble-hearted president" would bear Anderson's name.