What do philately and duels have to do with the RBSCP reading room? 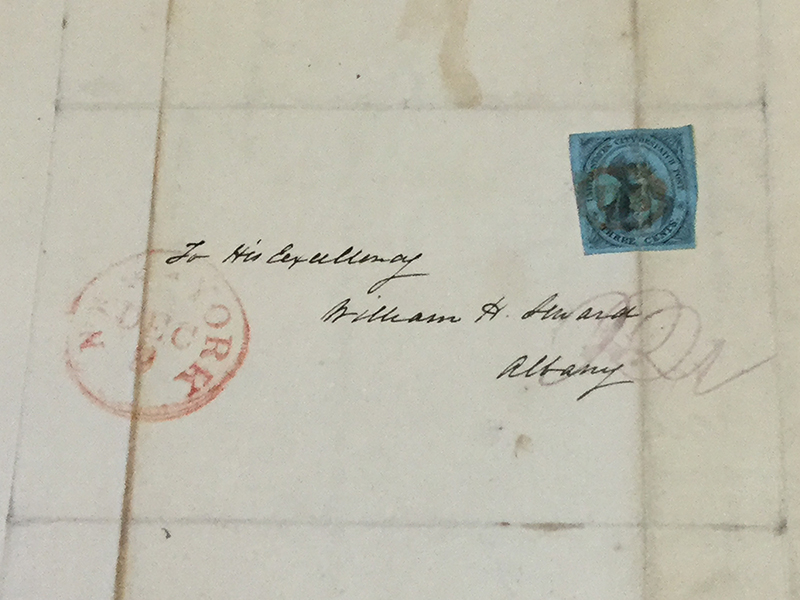 Pardon the cliché, but you never know what will come up each day in RBSCP, and personally, I enjoy when researchers share stories with me in the reading room. It is one of the most satisfying parts of my position as Public Services Senior Library Assistant in RBSCP.

This particular surprise turned out to be an 1842 postage stamp brought to my attention by Dr. Stephen Valone, a history professor at St. John Fisher, while doing research in the William Henry Seward papers. Both the presence of an 1842 stamp and the correspondence itself were indeed surprising and intriguing.

The postage stamp, an uneven small blue rectangle with a faded red “U.S.” inked over it, depicts an oval portrait of George Washington framed by the words “United States City Despatch Post Three Cents.” The design resembles the 1842-1846 6LB3 stamp, which was issued shortly after the U.S. government purchased the privately-held City Despatch Post in New York City, making it one of the earliest federal postage stamps.

The letter is also extremely interesting. Helen Lispenard (Stewart) Webb writes to New York State Governor and family friend, William Henry Seward in December 1842, to express her appreciation of her husband, James Watson Webb, being pardoned for his participation in a well-known duel, while also clearly stating her disapproval of Webb’s involvement. 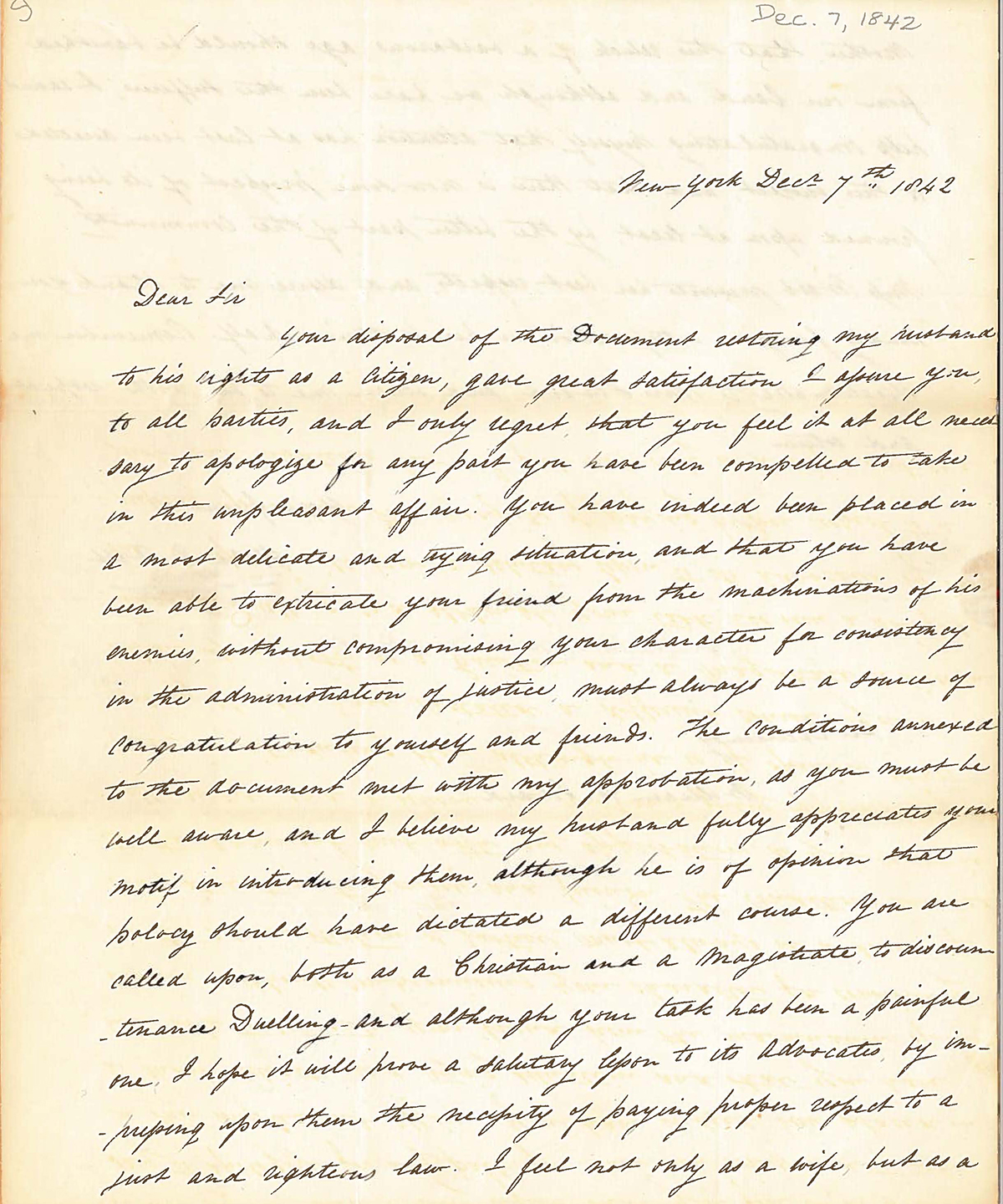 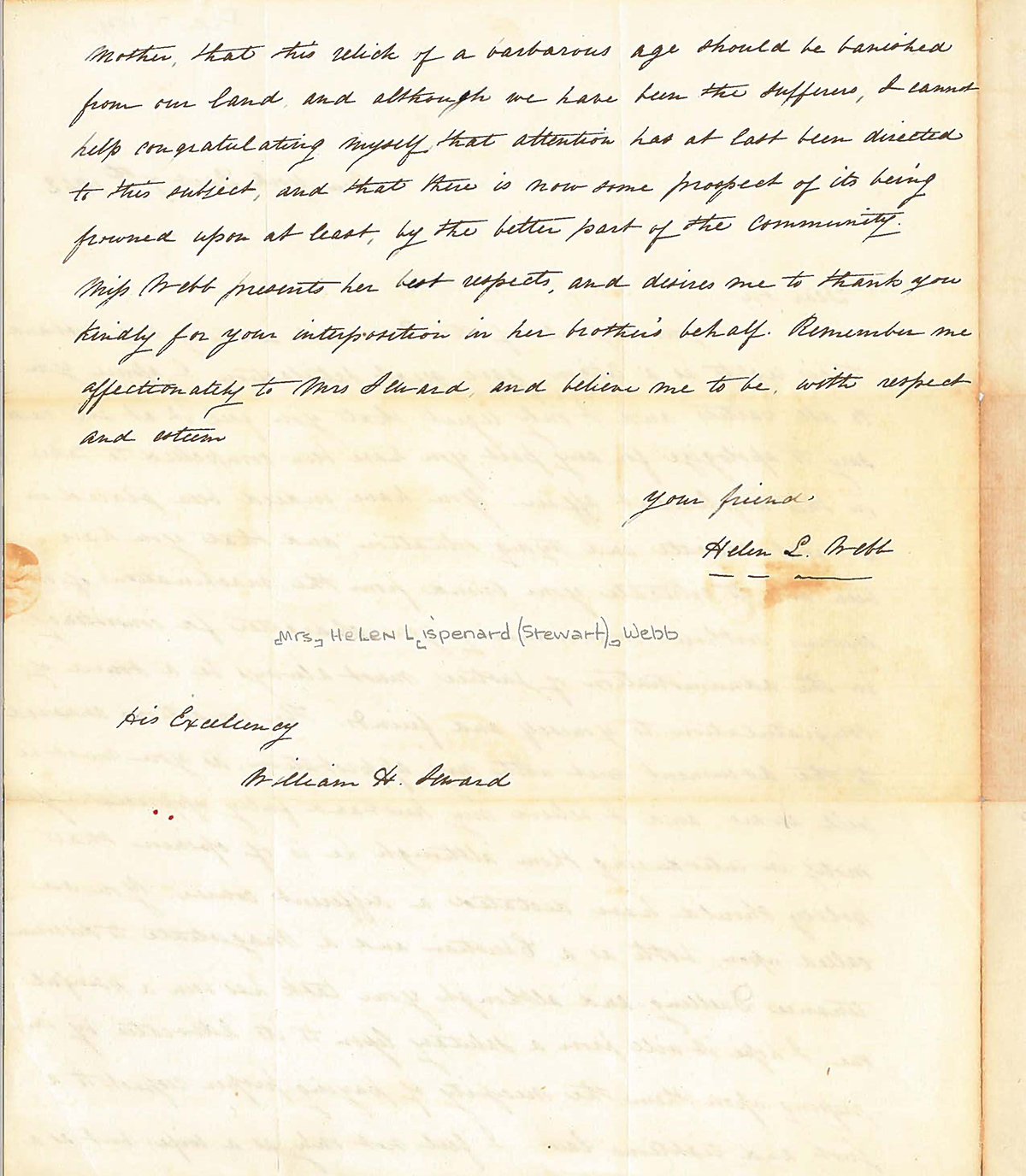 Duels, an illegal activity, could (and did) land participants in prison. Selections from Fall 1842 correspondence in the William Henry Seward papers refer to Webb spending time in The Tombs and reflect volatile public opinion about the whole affair.

James Bowen, Civil War General and close friend of Seward, writes to him on November 30, 1842, “I congratulate you on the happy accomplishment of the most difficult task- the pardon of Webb without shocking the moral sentiment of the community.” Bowen also acknowledges the complexity of the situation Seward faced, “A crime had been deliberately + in cold blood been committed by a personal + political friend he knew the penalty the laws imposed, he knew that he was about to outrage the moral sense of the community in which he lived + that his only apology was an insult from a drunken man.”

Gov. Seward had a history of exercising limited clemency when approached with requests for pardons. Glyndon Van Deusen writes in his 1967 biography of William Seward that he “weighed the applications for pardon carefully and made it a general rule to issue none before half of the sentence had been served, granting clemency chiefly where they were doubts as to the justice if the conviction, where punishment had been unduly severe or where the culprit was youthful or insane. He made penitence an indispensable condition of release” (pg 84). Webb was undoubtedly grateful for this patronage and named one of his sons “William Seward Webb”.

Seward’s legal associate and Union College classmate, Richard Milford Blatchford writes to Seward on December 2, 1842, “The pardon to Webb is just right- he is happy about that[.] His wife is delighted…”

While “delighted,” Helen Webb also acknowledged Seward’s difficult political position in this situation, made even more so by the attention her husband drew to himself with a lengthy editorial such as this one: 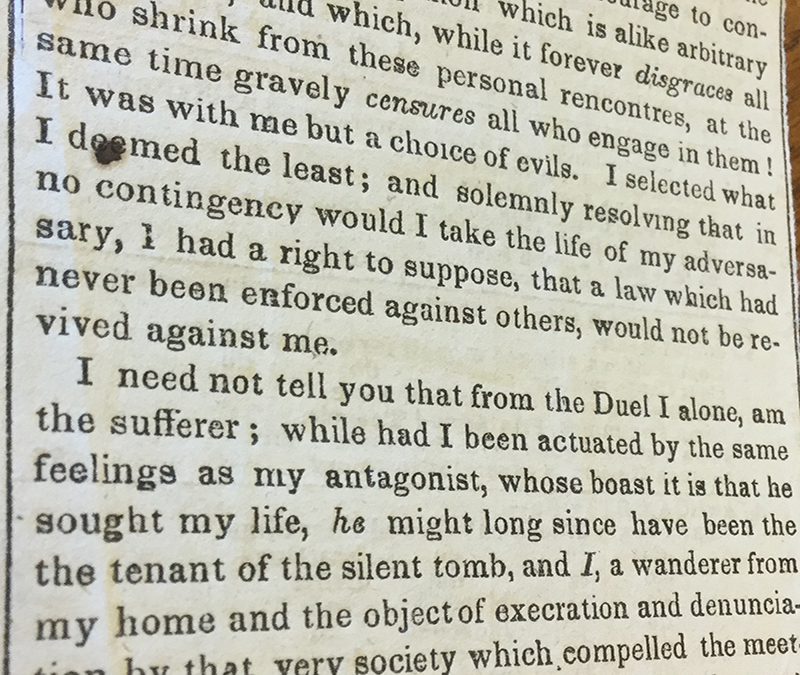 James Watson Webb writes that, “I selected what I deemed the least; and solemnly resolving that in no contingency would I take the life of my adversary, I had a right to suppose, that a law which had never been enforced against others, would not be revived against me. I need not tell you that from the Duel, I alone, am the sufferer…” (AS51)

Dueling figures rather frequently (or at least is an oft-discussed topic) in Webb’s life. William Henry Seward’s wife, Frances, writes to her husband in 1838, reflecting on Webb’s dueling and the effect on Helen Webb:

Is not that duel at Washington a shocking affair for Webb, how sorry I feel for his wife [ . ]
I think that last letter purporting to have been written by one of his friends (published first in the American) places the affair in a more horrible light than any thing I have seen on the subject….

Mrs Webb will of course be spared the perusal of much that I have seen, but she cannot avoid the knowledge that her husband has occasioned the death of
one of his fellow creatures by his impetuosity, this reflection is sufficient to embitter many hours in the life of a person of sensibility.

Dueling consisted of men fighting to defend one’s “honor” from a perceived slight or insult. This gendered method of conflict resolution inherently excluded women, while also clearly having a significant impact on them.

So what did women think of dueling? Correspondence from Frances Seward and Helen Webb provide valuable insight from their perspectives, indicating that these two women, at least, were not in favor of the practice. This overview of the Webb’s conviction and pardon barely scratches the surface of this hot topic in the Seward papers and there is still plenty of correspondence to delve into.

From exclamations, whoops of joy, gasps, or a hushed comments to oneself, it is extremely rewarding to witness those moments of uncovering something fascinating, obscure, or vital to someone’s research. So if you find yourself doing research in RBSCP’s reading room- don’t hold back! Share these stories with us!

For digital images and transcriptions of the Seward family correspondence: http://www.sewardproject.org/

For the complete finding aid to the William Henry Seward Papers (please note that the finding aid can take several seconds to load):
https://rbscp.lib.rochester.edu/william-henry-seward-papers