Embedded in the Archives: The Rochester Immigrant Perspective

Written by Molly Ball, History Lecturer, University of Rochester Professor of HIS252: Immigration in the Americas

Immigration is intricately woven into the histories of major American cities like Buenos Aires, São Paulo, New York City, San Francisco, and Toronto. Immigration is also a central feature to Rochester’s history. In Professor Molly Ball’s Fall 2018 HIS252: Immigration in the Americas course, students explored immigrant experiences across the American continent between 1860 and 1960. As they read and discussed topics such as hyphenated identity, formal and informal institutions and shifting gender roles, they began to develop their own original research projects about Rochester’s immigrant history. Collections and sources available at Rare Books, Special Collections and Preservation (RBSCP) and valuable assistance and guidance from the RBSCP staff made their individual research possible.

To showcase their research, students chose a location in the city that they felt best represented their individual research and wrote a 150-word abstract explaining how the landmark exemplified their projects. They also provided keywords and time periods as additional parameters to describe their landmark. Combining the students’ efforts along with the expertise and talents of the Digital Scholarship Lab and the library’s Project Management produced the “Rochester: An Immigrant Perspective” interactive exhibit at Lam’s square from March 19th – March 31st 2019. The exhibit invites viewer to consider the role of lesser-known figures in the city’s history, encourages an immigrant-oriented perspective of the city, and demonstrates fluctuations in settlement patterns over time.

The name of the landmark, specific latitude and longitude coordinates, abstract, bibliography and time period students provided were used to create database to develop an interactive map using ArcGIS. The resulting map demonstrates how the immigrant sphere contracted in between 1900 and 1940 before expanding again in the 1950s. The map also demonstrates that an immigrant perspective in the twentieth century requires reorienting the center of life north of Main Street. 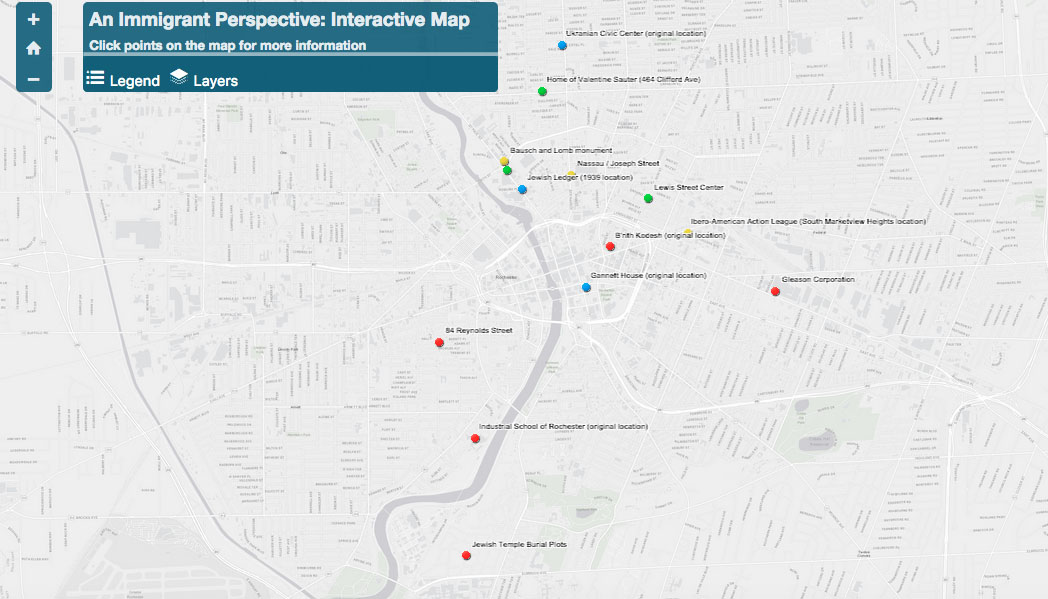 A looped video tour based in the landmarks using the Google Earth tour provides a dynamic view of the students’ research and asks viewers to reconsider the historical significance we attach to common spaces. 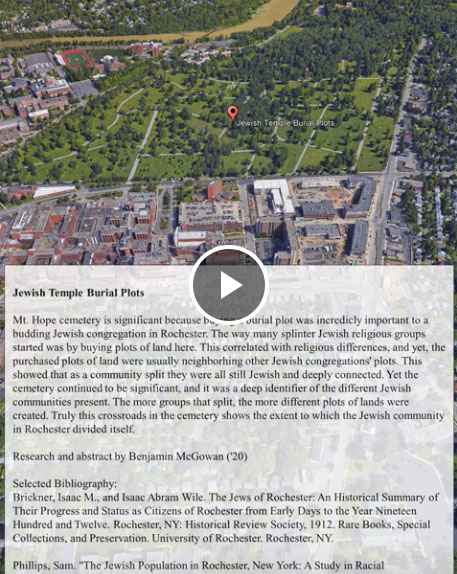 The database’s design allows for an ongoing extension of this research. New layers can be added to the ArcGIS map. For example, overlaying the "Rochester: An Immigrant Perspective” map with other maps, like redlining zones or public transportation routes, will reveal greater insight into how immigrants organized, adapted, interacted and lived in secondary and smaller cities like Rochester. New landmarks can be added to provide greater depth into Rochester’s historical perspective.  Each semester that Immigration in the Americas is taught, students’ research will contribute new insights and perspectives into understanding immigrant organization and networks and into immigrants’ profound impact on the city's history.