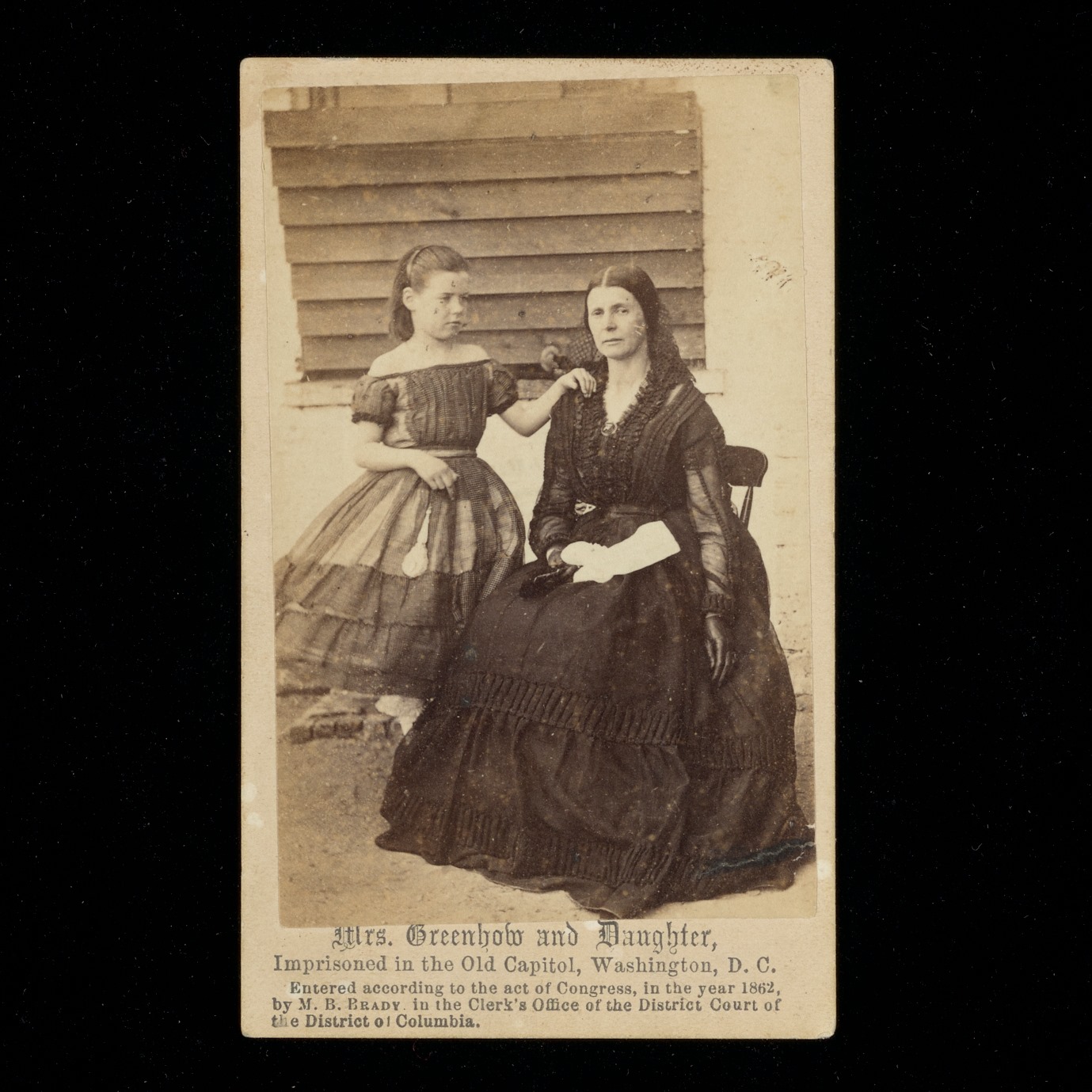 The excitement that comes from the acquisition of an exciting new manuscript can be tempered by the realization that its creator had less than perfect penmanship. Even archivists who work with material written in a wide range of hands can find it difficult to read a letter in cursive. Many factors come into play; the creator’s penmanship, the size of the paper and text, and the type of ink used. Our new letter written by Rose O’Neal Greenhow is a wonderful example of a letter that benefits greatly from transcription. It was a bonus to receive a transcription with this letter, and we are excited to share it with you. 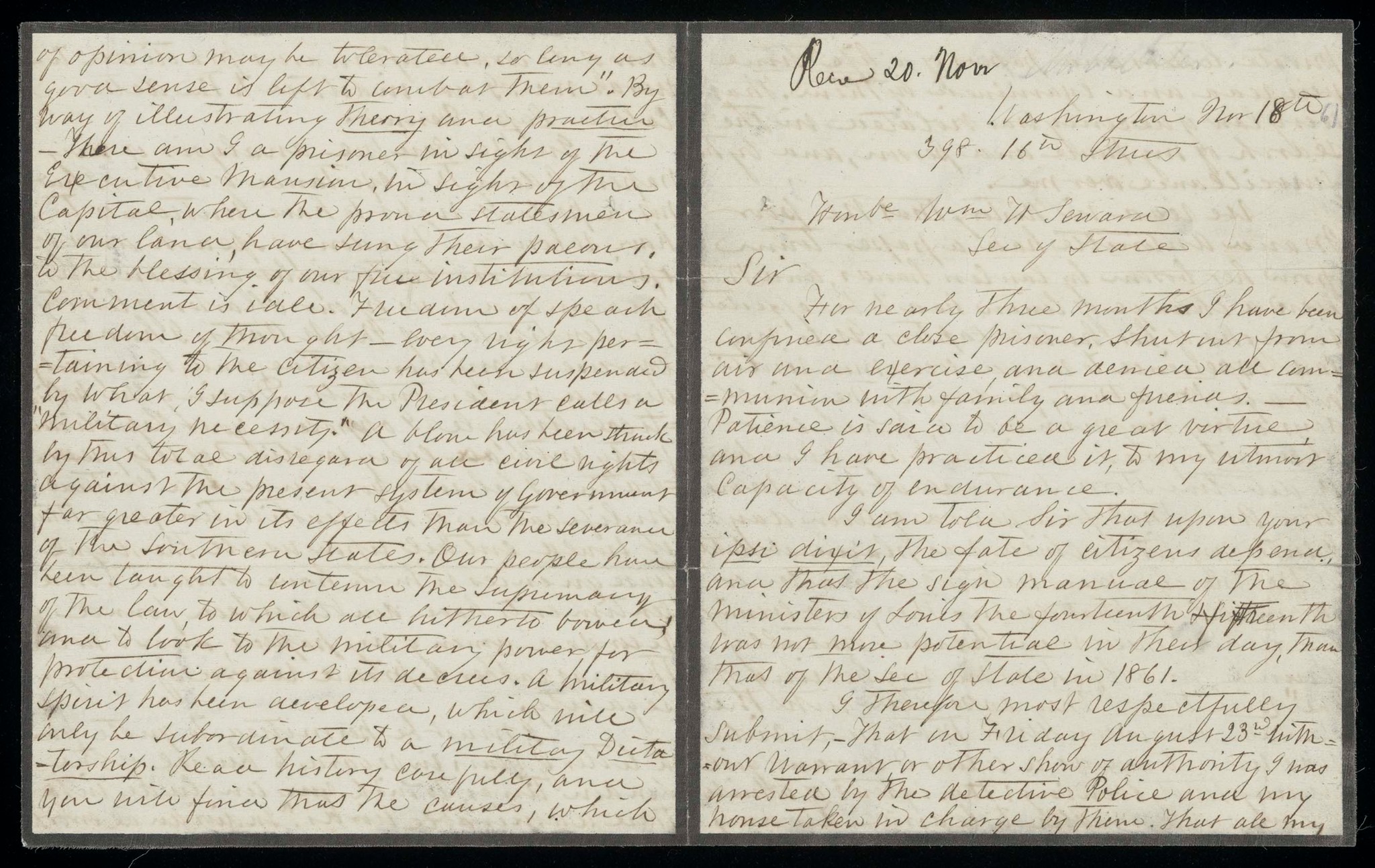 For nearly three months I have been confined, a close prisoner, shut out from air and exercise, and denied all communication with family and friends. - Patience is said to be a great virtue and I have practised it to my utmost Capacity of endurance.

I am told Sir that upon your ipse dixit, the fate of citizens depend, and that the sign manual of the ministers of Louis the Fourteenth and fifteenth was not more potential in their day, than that of the Sec of State in 1861.

We read in history, that the poor Maria Antonette had a paper torn from her bosom by lawless hands, and that even a change of linen had to be effected in sight of her brutal captors. It is my sad experience to record even more revolting outrages than that, for during the first days of my imprisonment, whatever necessity forced me to seek my chamber, a detective stood sentinal at the open door. And that for a period of seven days I with my little child was placed absolutely at the mercy of men without character or responsibility. That during the first evening a portion of these men became brutally drunk, and boasted in my hearing of the "nice times" they expected to have with the female prisoners. And that rude violence was used towards a colored Servant girl during that evening; the extent of which I have not been able to learn - For any show of decoram afterwards was practiced toward me, I was indebted to the detective called Capt. Dennis.

In the careful analysis of my papers, I deny the existance of a line I had not a perfect right to have written, or to have received - Freedom of speech and of opinion is the birth right of Americans, guaranteed to us by our Charter of liberty, the Constitution of the U States. I have exercised my prerogative, and have openly avowed my sentiments. During the political struggle, I opposed your Republican party with every instinct of self preservation. I believed your success a virtual nulification of the Constitution, and that it would entail upon us the driful consequences which have ensued. These sentiments have doubtless been found recorded among my papers, and I hold them as rather a proud record of my Legacity.

I must be permitted to quote from a letter of yours, in regard to Russell of the London Times, which you conclude with these admirable words: "Individual errors of opinion may be tolerated, as long as good sense is left to combat them." By way of illustrating theory and practice - Here am I a prisoner in sight of the Executive Mansion, in sight of the Capital, where the proud statesmen of our land have sung their paeans, to the blessings of our free institutions. Comment is idle. Freedom of speech freedom thought - every right pertaining to the citizen has been suspended by what, I suppose, the President calls a "military necessity." A blow has been struck, by this total disregard of all civil rights against the present system of Government far greater in its effects than the severance of the Southern States. Our people have been taught to unturn the Supremacy of the law, to which all have hitherto bowed; and to look to the military power for protection against its decrees. A military spirit has been developed, which will only be subordinate to a military Dictatorship. Read history carefully, and you will find that the causes, which bring about a Revolution rarely predominate at its close, and no people have ever returned to the point from which they started - Even should the Southern State be subjugated, and forced back into the Union (which I look upon as impossible, with a full knowledge of their resources,) a different form of Government will be found needful to meet the new developments of National character. There is no class of society, no branch of industry, which this change has not reached, and the dull plodding methodical habits of the poor can never be resumed.

My own convictions are that the only chance of our ever again being one people is in the capacity of the South to maintance herself. Then negoations can be entered into for adjustment which can bind us together stronger than ever. – Not as a conqueror or conquered But as brothers who have quarreled and are willing each to yield something for the b(l)essings of fraternal intercourse once more.

You have held me Sir to a mans accountability, and I therefore claim the right to speak on subjects usually considered beyond a womans ken, and which you may class as "errors of opinion"- I offer no excuse for this long digression, as a three months imprisonment without formula of law gives me authority for occupying even the precious moments of a Sec of State.

My object is to call your attention to the fact, that during this long period of my imprisonment I am yet ignorant of the causes of my arrest - That my house has been seized by the Government and converted into a prison - That the valuable furniture it contained has been abused and destroyed - That during some periods of my imprisonment I have suffered greatly for want of proper and sufficient food. Also I have to complain that more recently a woman of bad character recognized as having been seen on the Streets of Chicago as such, by several of the guard Calling herself Mrs. Onderdunk was placed here in my house, in a room adjoining mine.

In making this exposition I have no object of appeal to your sympathies. If the justice of my complaint with a decent regard for the divers opinion does not move you, I should but waist time to claim your attention on any other lure.

I may however recall to your mind, that but a little while since, you were quite as much prescribed by public sentiment here for the opinions and principles you held, as I am now for mine.

I could have easily escaped arrest having had timely warning - I thought it possible that your statesmanship might prevent such a proclamation of weakness to the world, as even the fragment of a once great government, turning its arms against the breasts of women and children. - You have the power Sir and may still further abuse it. You may prostrate the phisical strength by confinement in close rooms and insufficient food. You may subject me to harsher ruder treatment than I have already received. But you cannot imprison the soul. Every cause worthy of success has had its Martyrs. The words of the Heroine Cordet are applicable here: "C'est le crime qui fait la honte, et non pas l'echafaud." My sufferings will afford a significant lesson to the women of the South - that sex or condition is no bulwark against the surging billows of the "irrepressible conflict."

The "iron heel of power" m(a)y keep down, But it cannot crush out, the spirit of resistance in a people armed for the defence of their rights. And I tell you now Sir that you stand in the mouth of a crater where smothered fires in a moment may burst forth.

It is your boast that thirty three Artillery fortifications now surround Washington. - The fortifications of Paris did not protect Louis Phillippe when his hour had come.

In conclusion, I respectfully ask your attention to this protest my protest and have the honor to be &&&