In about the year 1912, the Rochester Chapter, Empire State Society of the National Society of the Sons of the American Revolution (SAR), purchased what was known at the time as "The Eddy Collection" of Revolutionary War and Civil War documents and artifacts. G. Schuyler Eddy, a descendant of Gen. Philip Schuyler of Revolutionary War fame, apparently developed the collection during the late 1800s. Whatever documentation there was with the collection, if any, has since been lost. No known documentation or proof of provenance regarding the collection was obtained by the Rochester Chapter, but they displayed it at various meetings and patriotic functions until about the end of World War I when the Chapter fell into a period of decline.

At about this time the collection was turned over to the Rochester Historical Society (RHS); an inventory of the items was completed and the Society displayed them throughout the 1920s. The inventory lists many more objects than are known to exist at present, but many of the documents have survived. When the RHS returned the documents to the SAR, they did not have storage or display capabilities and the items were housed for many years in the basement of the Rundel Library in Rochester. Eventually the SAR was asked to remove the collection and it was distributed among the members. During this period, approximately 50 years, most of the artifacts were lost. From 1991 to 2003 the SAR made a concerted effort to locate as many of the artifacts and documents as possible. A few of the artifacts and this collection of nine documents have been recovered.

In 2003, the documents were de-acidified, cleaned and repaired as necessary by Fred Jordan, a professional paper conservator. At some point there was considerable damage done to the documents, apparently for the purpose of fitting them into frames. Some of the letters were cut down to fit, some had separate pages glued together and the New York State Seal was removed from the vellum document appointing John Ten Broeck as Sheriff of Albany County. The seal was restored through the work of Dr. Alexander Wieber, a specialist in the history, use and preservation of wax seals. 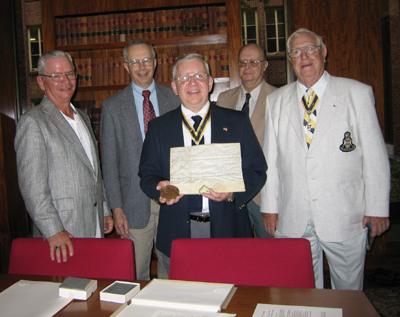 Presentation of the documents to the Department of
Rare Books & Special Collections, July 27, 2004

The documents are as follows: