The statue of President Anderson which stands between Burton and Crosby Halls was originally erected on the Prince Street Campus in 1905. After Anderson's death in 1890, a movement was started to have a statue created in his honor. The statue was placed in the "circle" in front of Anderson Hall. The total cost was $12,642. 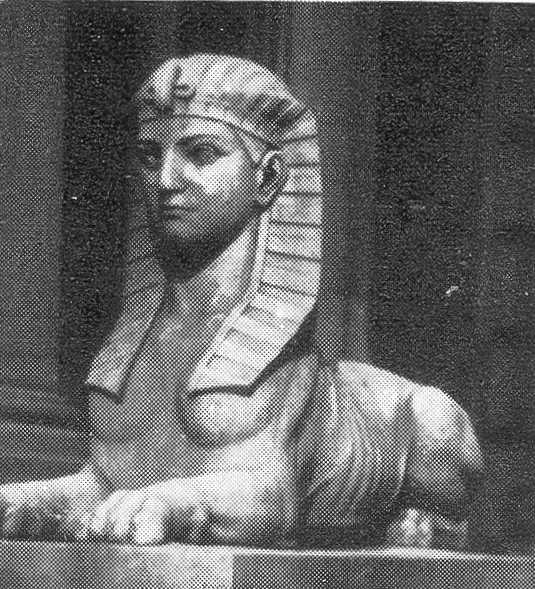 The sphinxes which now sit outside of the connecting passage between Morey and Lattimore were originally located on the Prince Street campus, at the doors of Sibley Hall. Like the Rock near Susan B. Anthony Hall today, it was not uncommon for classes to paint the sphinxes, though the paint was usually removed by the rain. On one occasion in the late 1920s, however, it was not.

According to an article in the Campus:

"The recent heavy rains having failed to diminish the garish beauty of the yellow coat adorning the sphinxes of Sibley Hall, University officials have now given up hope that the natural elements will care for the situation. "I am not going to do anything about this," says Donald B. Gilchrist, librarian. "If they want to live in a pig-pen, why, let them. But you know, this is only a cheap attempt. The best job that I remember was done a few years ago in connection with a class battle. Black was the only color used, but that was wonderful paint. The eyes were circled, the ribs outlined, and paint was liberally applied on all the other features. It took two sandblasting crews to get that paint off and it cost the sophomore class about $250."

In an article written by Grace L. Murray '25 (Our Campus--Yesterday, Today and Tomorrow), the sphinxes "continue to propose their riddles hidden between Morey and Lattimore Halls…Those who do not solve the riddle pass into a nearby tunnel to find the door on the other end locked and, sometimes returning, find the door they entered secured. 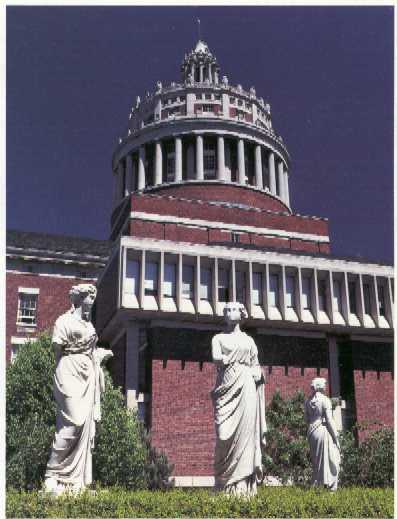 The statues which stand in the area between Meliora Hall and Rush Rhees Library had their first home in niches on the exterior of the Sibley Library on the Prince Street Campus. Eight were originally ordered from Europe by Hiram Sibley, but legend has it that two were lost while being transferred from the boat either in the Hudson or the Erie Canal. Two more, seriously deteriorated after almost one hundred years of weathering, were lost when Sibley Hall was razed in 1968. The final four were placed in storage until 1980, when the Class of 1954 sponsored the restoration of the statues and their placement on the River Campus.

The statues meant to symbolize various branches of knowledge: Navigation, holding a chart; geography, holding a large globe; Astronomy, holding a small globe; Science, with three books in one hand and a magnifying glass in the other; Commerce, holding three links of chain; and one unnamed statue, perhaps Transportation, with her hand placed on a wheel. (This last sounds remarkably similar to Industry, who stands on the landing of the Grand Staircase in Rush Rhees Library.)

"…The 8 statues for the Sibley Building will not be shipped before the end of Feb. next so as to arrive in N.Y. after the opening of canal navigation when the canal boats can come directly to the ship and save storage and handling of these very heavy statues. All these figures have to be made. They are statues of different subjects & colossal in size & consequently very heavy could not be done before the last of September and of course would arrive too late for canal navigation. As all are "Statues + works of art" and for the university will be (duty?) free. I send them to you directly without consuls certificate."

The original of this letter may be seen in the University Archives.

Athena and Industry in the Rush Rhees Library

These two statues, which stand at the top of the Grand Staircase in Rush Rhees Library, were designed by Phillip Merz (who also designed much of the River Campus). The statues were carved at the studio of A. A. Ardolino, who carved the Lincoln Memorial in Washington, DC. (Ardolino also carved the figures in the pediment on the façade of the Library.) The Statue of Industry is not based on any figure of classical mythology, but has a cog near her left heel and a wheel. She holds an oil lamp in her hand which according to some was the second choice. The first design apparently showed her holding a Kodak camera. This was deemed inappropriate, although Mr. Eastman's funds were largely responsible for the building of the River Campus. There is no evidence that the camera was anything more than a design proposal; photographs from 1930 clearly show the oil lamp.

In the 1950s, the statues were deemed "unartistic." Newspaper articles from 1954 and 1957 note that the statues were offered free to anyone who could remove them without damaging the building. Then superintendent of buildings and grounds, James M. Young, was unsure of how that could be done. "When they were put in, there was a hoist to do it…It would take an engineering feat to get them out in one piece." Asked what would become of the statues if they found no takers, then- Library director John R. Russell, replied, "I guess they'll be there for the rest of time." 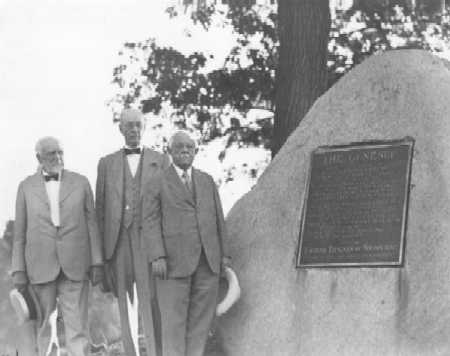 The Swinburne Rock which stands near the Inter-Faith Chapel was originally found in a field near the head of Irondequoit Bay. The Rock and the bronze plaque attached to it were dedicated as a memorial to Thomas Thackeray Swinburne '92 a few years after his death in 1926. Devastated by the death of his sister two weeks earlier, Swinburne committed suicide by jumping into the Genesee River at the Central Avenue Bridge on December 17, 1926. His body was carried over the Upper Falls and not found until June of 1927.

The bronze plaque is inscribed with two verses of "The Genesee", whose verses Swinburne composed.

Legend has it that Swinburne's ashes were buried in a bronze box under the boulder; however, this has proved to be unsubstantiated. A careful search of the area beneath the boulder when it was moved in 1968 (the Memorial was moved approximately 20 feet to allow for the construction of the Chapel) revealed nothing.

In a 1932 article in the Rochester Review, Professor Fairchild wrote that the boulder was "an eruptive rock, igneus but not volcanic. Its crystalline structure resembles granite, but in composition it is mostly Labradorite feldspar. Technically it is anorthosite." He further identified it as part of an island in Lake Iroquois, that long-evaporated lake which succeeded the ice sheet in this region. The boulder's estimated weight is 26 tons. 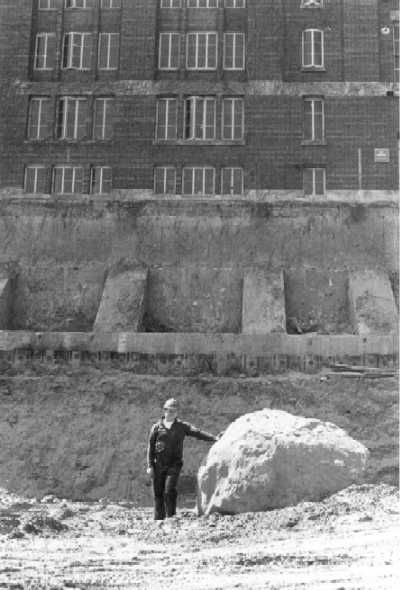 The Rock which stands near Susan B. Anthony Hall was unearthed in 1967, during the excavation for the addition to Rush Rhees Library. 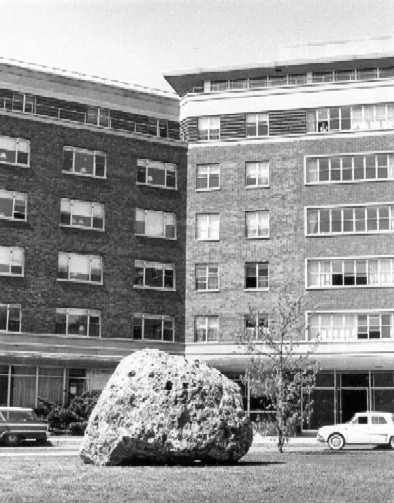 It was moved to its present location in 1986 (it was originally in the center of the SBA circle).